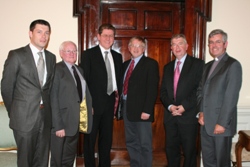 Fears for the future of Southern Sudan raised by representatives of the Church of Ireland at a meeting with Irish Government officials will be conveyed to the next meeting of EU Foreign Ministers.

The Church of Ireland Sudan Partnership Group met with Kevin Dowling, Director of the Irish Government’s Africa Section on December 9, exactly a month to the day before a Referendum in Sudan gives the people the opportunity to vote to become the world’s newest state and acquire independence from the North.  Also present at the meeting were Pat Bourne and Martin Gallagher of Irish Aid. 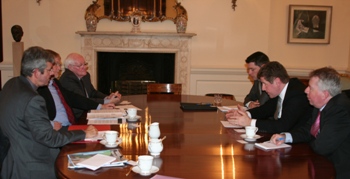 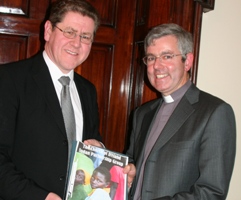 During a lengthy meeting in Iveagh House, Dublin, members of the Sudan Partnership Group stressed their desire for a peaceful and fair referendum, with freedom for all to vote; the opportunity for Southerners living in the north to be given the opportunity to vote without retribution; and expressed concerns about a separate referendum in Abyei, an area they fear could be a potential catalyst for a return to war, especially in the border areas.

They also raised the issue of provision for Sudanese nationals living outside Southern Sudan to vote, learning that any Sudanese people living in Ireland would have to travel to London to register and to vote, and discussed possible outcomes both to the referendum and the ending of the Comprehensive Peace Agreement which will run out on July 8 next year.

The Church delegation was assured that the Irish Government was very aware of the issues in Sudan in advance of the referendum, and that it would continue to be a focus of Foreign Affairs for some time.

All members of the Sudan Partnership Group have visited Sudan during the past year. The Rev Canon Cecil Wilson, former Director of Mission with CMSI, said after the meeting: “The warmth of the reception and the time they gave us and the willingness to remain in contact over this issue was extremely positive.” 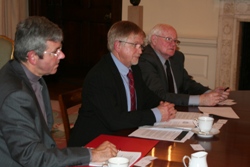 David Gough of CMSI has been in Southern Sudan twice this year, returning home only two weeks before the meeting with the Irish officials. “The Irish Government has identified Abyei as their main concern which mirrors the concerns brought to us by Archbishop Deng and our global partners,” he said.

CMSI has offered to keep Irish Government officials advised of any developments on the ground brought to its attention by its partners in Sudan.

Archdeacon Stephen Forde, chair of the Diocese of Connor Council for Mission, travelled to Sudan in January and July this year. He said: “I was impressed that Mr Dowling and his team were very up to speed with the situation. Their understanding accorded with the views that had been expressed to us by those we have come to know in Sudan.”

Mr Dowling said his officials would brief Foreign Affairs Minister Micheál Martin on the issues raised by the Sudan Partnership Group, and these would be on the agenda at the EU Foreign Ministers’ meeting in Brussels on Monday December 13.