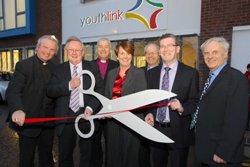 As one of the four largest church denominations in Northern Ireland, the Church of Ireland plays a key role in the development and operation of Youthlink.

The organisation is the largest provider of training courses for youth workers in Northern Ireland, and the Church of Ireland has run youth work courses in conjunction with Youthlink for several years.  Many of the church’s youth leaders have benefited from Youthlink training and some have gone on to the Centre for Youth Ministry degree offered by Youthlink in conjunction with Belfast Bible College. 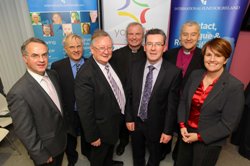 The building was opened by David Graham, Board Member of the International Fund for Ireland which contributed £975,000 to the project.  It was dedicated on behalf of the four churches by the Rev Normand Hamilton, Moderator of the Presbyterian Church in Ireland.

Bishop Michael commented on the event saying: “The enthusiasm and vitality which surrounded the Official Opening of Youthlink’s new premises in Belfast was infectious. Not only were members of the churches present in good numbers but the involvement of Ministers from strategic departments in Stormont added another whole dimension as did the participation of young people who have been part of Youthlink’s Programmes to date.”

The Bishop continued: “I wish Youthlink every success as it models an openness to the future in the Northern Ireland which we all want for our young people.”

Further information can be downloaded in the International Fund for Ireland press statement on the opening of the new Youthlink NI premises.