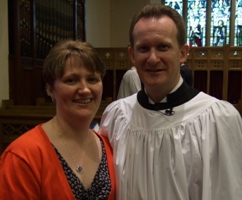 Adrian is well known to parishioners as he has served in All Saints for the past three years as part of his training.

"I have enjoyed every minute of my time at All Saints’, Antrim so far," he said. "The congregation was very welcoming to my wife Wendy, our daughter Abigail and myself when we first arrived and they have looked after us as much as we have them. We have made a lot of very good friends here.”

When he was growing up Adrian, 41, was a member of Whitehouse Presbyterian Church, joining St John’s Church of Ireland, Whitehouse, when he met Wendy. He was involved in a Christian Drama group called ‘The Big Umbrella.’

Adrian worked as a telecommunications engineer at Nortel Networks and following redundancy took up a teaching post at the South Eastern Regional College.

“I felt that I was being directed towards ministry. After many discussions and prayers I took the step forward and applied for ministerial training at the Church of Ireland Theological College, Dublin," he said.

As a non-stipendiary Minister, Adrian will continue as a lecturer in Information Technology at South Eastern Regional College in Lisburn.
.
A former Assistant County Commissioner (Venture Scouts) in County Antrim, Adrian enjoys caravanning with his family, as well as reading, watching films, cooking and baking.