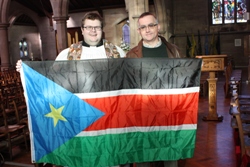 On the day of the opening of the Referendum on independence in Sudan, the Parish of St Peter and St James, Belfast, focused on Southern Sudan.

Parishes across the Church of Ireland were encouraged to pray for our partners in Sudan on the day of the historic referendum, part of the 2005 peace agreement which will run out in July this year.

Connor Diocese has had a link with Yei Diocese in the south of Southern Sudan since 2007, and has funded the building of a school in Mongo village in the diocese. This was officially opened when a Connor Mission Experience Team Abroad visited Yei in July, facilitated by CMS Ireland. 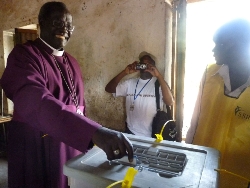 Bishop Hilary of Yei and his wife Joyce cast their vote on January 9. In communication to CSMI he writes: "Mama Joyce and I have just completed voting at Yei Day Secondary  School for the referendum.  There was great sense of excitement as people dropped into the box, their final choice for the future of South Sudan. The lines are extremely long, very lazy and there is general quiet. Today marks the beginning of a new era in the Sudan where this country will never be the same. It is most likely that South Sudan is already independent.

"Yei is very quiet and peaceful. No big music from the drinking joints. There is local order; no sale of alcoholic drinks until the vote is over 15th January 2011. The security is beefed up and you can see a real mood of great expectation for this day.

"This being Sunday, as I was casting my vote I also thought that we were voting for good life here in the Sudan. But at the same time this should never make us dismiss the fact that there is a God who is in control, and that our Real Good Life is in heaven. We should never ever miss this point here in the Sudan…on earth."

CMSI have also published the impressions of Bishop Anthony Poggo of Kajo-Keji Diocese. The CMSI report can be read in full here.

On Sunday David Cromie, a parishioner in St Peter’s and accountant for the dioceses of Connor and Down and Dromore, who visited Yei with a small team  in January 2010, spoke of his experiences in St Peter's. The prayers of the parish were focused heavily on Sudan.

Listeners to BBC Radio Ulster’s Sunday Sequence on January 9 will have heard a number of reports from Southern Sudan as polling in the referendum got underway.

To date the referendum seems to have passed in the main peacefully, although some news agencies reported a number of deaths in the disputed border region of Abyei http://www.bbc.co.uk/news/world-africa-12150292. It is understood the final outcome of the referendum will not be known until February 14.

The Sudan Tribune (January 11 2011) carried this report on its website:

The Southern Sudan Referendum Commission (SSRC) on Monday outlined the timetable for announcing and appealing against the results of the ongoing vote whose outcome will determine whether the semi-autonomous region of South Sudan will remain part of a united Sudan or secede to create a new state.
The polls for the referendum opened domestically and in eight countries abroad as originally scheduled on 9 January amid reports of low turnout in the north and massive in the south.
In a press conference held at the SSRC’s headquarters in Khartoum yesterday, the commission briefed local and international media on the progress of the voting process and informed them of the dates it scheduled for the gradual announcement of the results.
The commission’s member Paolino Wans assured the media that the balloting process was proceeding smoothly in both north and south Sudan, citing reports submitted by the heads of polling stations as confirming that the polls were proceeding in a quiet and safe environment and that voters were able to cast their ballots without hindrance.
Paolino revealed that the voter turnout in south Sudan reached 20% whereas the turnout in the north was 14%. He further announced that the commission had decided to add one hour to the opening hours of polling stations in order to allow voters more time to exercise their right.
He said that the 15 January would remain the last day for casting ballots unless the circumstances demand an extension.
Paolino said that the commission expects the announcement of results at the 3000 polling stations to begin during the period between 15 to 17 January and that provincial results would be announced on January 20.
According to him, the commission’s forecasts suggest that the results in south Sudan would be announced on 23 January while the results in Out of Country polling stations would be announced on 23 January.
The SSRC official said that preliminary results would be announced on 7 February at which point a week-long window from 8 to 12 February will begin for submitting appeals and legal challenges. He further announced that final results are expected to be announced on 14 February.