A Service of Re-hallowing was held in St Mark’s Parish Church, Ballymacash, on Sunday January 23 with the Archbishop of Armagh, the Most Rev Alan Harper, OBE, as guest preacher.

St Mark’s has undergone extensive renovations in a £450,000 scheme largely funded by the generosity of parishioners, who have to date raised more than half the total cost. Indeed they donated an incredible £55,000 on a Gift Day in March last year, which the rector Canon George Irwin said was the confidence boost needed to allow the scheme to go ahead. 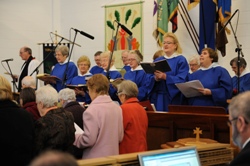 “It was a very courageous decision and a matter of faith,” he said. “The decision to undertake the renovations was taken three years after we completed a major extension and renovation project at the rectory here, which we have just paid off.”

Work began in July 2010 and over a six month period the church, parochial hall, side chapel and ancillary rooms were reroofed and redecorated and a new gas-fired heating system installed throughout the whole suite of buildings.

The renovation scheme has provided the opportunity to make welcome changes to the interior design of the church itself with the removal of a low-level ceiling.  Canon Irwin said the new design had greatly improved the acoustics and enhanced the worship area in terms of appearance and atmosphere. 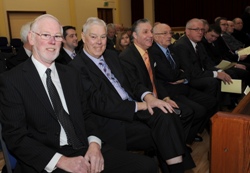 He described the re-hallowing as a ‘significant milestone’ in the life of the parish. The first Church building was a Chapel of Ease dedicated in 1892.  In 1902 the building was designated the Church of St Mark and served the people of Ballymacash until 1975 when the present church was opened to accommodate the steadily growing congregation.

“The successful completion of the renovation project in 2010 reflects credit on the personnel involved and serves as a fitting tribute to those who laboured down through the years to maintain this church as a place where we and future generations may have the privilege of worshipping God,” said Canon Irwin.

He paid tribute to ‘the vision, expertise and unstinting commitment’ of the architect Paul Blamphin, and thanked main contractors William Dowling Limited and all the firms who worked on the project. 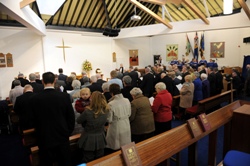 Canon Irwin continued: “A great debt of gratitude is due to the Churchwardens, Glebewardens, Select Vestry and members of the Church Renovation Committee for their dedication and generous sacrifice of time and talents and to all parishioners for their wholehearted, concerted and prayerful support.

“We thank the Sexton, Mrs Sylvia Belshaw and her husband Brian for undertaking the extra responsibilities associated with the renovation work and the members of Ballymacash L.O.L. 317 for their kindness in lending chairs for our use whilst we worshipped in the Canon Jones Hall during the Summer and Autumn of 2010.

The Re-hallowing Service was led by Canon Irwin.  Valerie McKay (Select Vestry Treasurer) and Michael Lynn read the Scripture lessons.  Musical Director Tim Howe presided at the organ and together with the church choir, led the thanksgiving praise that included ‘Praise to the Lord, the Almighty, the King of creation’ and ‘Now thank we all our God’.