The people of Southern Sudan have voted overwhelming for independence and our friends in Connor’s partner diocese of Yei have been celebrating.

Although the result of the January 9 referendum was not expected until February 14, the Southern Sudan Referendum Commission announced on Monday February 7 that  98.83 per cent of voters had opted for independence.

Further good news is that Sudanese President Omer Hassan Al-Bashir has stated that he officially accepts the final results of the referendum, paving the way for the proclamation of an independent state in the region.

This means a new future for people who have lived through decades of civil war. 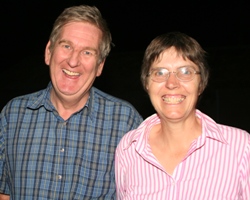 And the result has brought joy to the people of Yei, a joy which comes across clearly in this blog from John and Poppy Spens, CMSI mission associates in Yei.

'At about 9 pm yesterday evening, we were at home finishing things off after a long day.  Suddenly, there was an eruption of noise – shouts, cheers, fireworks – the sound grew and grew from all around us.

We soon realised that it wasn't the sound of fireworks but of gunfire.  Guns that had once been weapons of warfare were now firing in joy into the night sky, celebrating the fact that the people of South Sudan had voted by an overwhelming majority in favour of secession.

We could look back to that week in January when, from January 9th, for one week, people queued for their turn to vote.  The numbers were huge; the queues were long and the sun was hot, as January is one of the hottest seasons in South Sudan. But people waited patiently, excited that after decades of war, they now had the opportunity to express their views through the ballot box.

The turn-out was very high – it had to be over 60 per cent to meet the requirements set by the Referendum Commission – and by the end of the week, almost every registered voter had voted.

Then there was an anxious period as the votes were counted, but gradually the news filtered out.  In many polling stations, only a handful had voted for unity. In most, over 99 per cent had voted for secession from the north.

The Government and the Church urged everyone to be patient and not to celebrate but to keep calm until the result was official and in case there were any legal challenge to the result.  But, earlier than expected, late yesterday evening, the result was announced on radio and television and, as news spread like wildfire, so did the sounds of celebration!

As the night wore on, the gunfire grew quiet but the sound of music and singing and cheering continued.  In Yei, it went on all night only becoming quiet at sunrise.  We spoke to Sudanese staff and, yes, they had been up all night, singing and dancing with the crowds in Freedom Square, celebrating the day for which they had prayed for so many years.

Everyone knows that it is not over yet but all are praying that the next few months will be peaceful as they eagerly await the day of Independence – 9th July 2011.  And then the partying will really start!!'

Political situation permitting, a seven-strong META (Mission Experience Team Abroad) from Lisburn Cathedral will be travelling to Yei during the summer. The team will be led by curate the Rev Simon Genoe and Zara Wortley from the Cathedral’s Fusion youth project.  Although dates for the META have yet to be finalised, it is possible they may be in Yei for the Independence Day celebrations!

Archdeacon of Dalriada in visit to Sudan