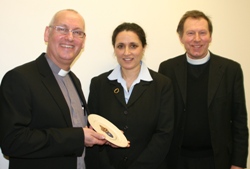 Canon John Mann, who will lead a diocesan pilgrimage to the Holy Land later this month, was also present.

The Dublin-based ambassador was in Belfast to meet with a number of Church leaders, including Roman Catholic Bishop Noel Trainor and the Presbyterian Moderator, the Rev Dr Norman Hamilton.

Archdeacon McBride said she was very interested to learn about the diocesan pilgrimage to the Holy Land.

He said: “She explained that being the Israeli ambassador based in Dublin was a challenging post as there was quite a negative portrayal of Israel in certain sections of the media in the Republic.

“She was interested to learn about the role of the church in Northern Ireland and how we were trying to promote the building of good relationships between the different communities in our local context.”

Before her departure, Ms Zack was presented with the gift of a Connor plate by Archdeacon McBride and Canon Mann.

More than 90 people from Connor Diocese will travel to Israel, accompanied by the Bishop of Connor, the Rt Rev Alan Abernethy, for the pilgrimage which takes place between Tuesday March 22 and Friday April 1.