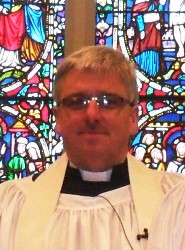 The Rev David Ferguson, Curate Assistant of the Parish of Antrim, has been appointed as Incumbent of the Grouped Parishes of Ramoan and Culfeightrin, Ballycastle.

Mr Ferguson, 56, is married to Margaret and has four children and three grandchildren. Before his ordination in 2004 he served in the police for 29 years.

He has served as curate in Antrim Parish since 2004, and last year switched from Non Stipendiary Ministry to Full Time Ministry.

“I have really enjoyed my time in Antrim,” said Mr Ferguson. “I had great colleagues and had the opportunity to do some hospital chaplaincy work. It really has been an amazing part of my journey, but I am looking forward to the challenges ahead.

“The two parishes are in a rural area and there is strong community support among the denominations, as there is in Antrim, and I look forward to continuing to work in that environment and building on the good work that has been ongoing in Ramoan and Culfeightrin.”

Mr Ferguson’s Institution will take place on Tuesday May 2.