Institution in parishes of Whitehouse and St Ninian 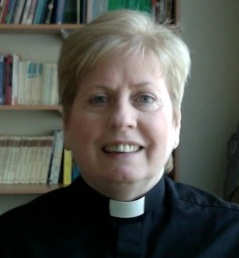 The institution of the Rev Elaine O’Brien as incumbent to the United Parishes of Whitehouse and St Ninian took place on Tuesday March 15 .

Elaine was previously rector of Clogherny and Drumnakilly, Diocese of Armagh.

A native of Belfast, she grew up in Willowfield Parish, later moving to Cookstown, Co Tyrone, where she was a parishioner of St John’s, Moneymore. A mother of two grown up children, former Post Office Telecoms worker Elaine was commissioned as a Diocesan Reader in St John’s, Moneymore, in 1991.

In 1994 she began studying for the Non-Stipendiary Ministry, and following her ordination in 1997 was curate assistant in Killyman Parish, Dungannon.

She moved to live in Comber in 2000 and was curate assistant in St Dorothea’s, Gilnahirk. After consultation with the Bishop of Down and Dromore, the Rt Rev Harold Millar, Elaine decided to do the one year transfer course into full time ministry at the Church of Ireland Theological College in Dublin.

On completion of this she was placed in Clogherny, Seskinore and Drumnakilly as Bishop’s Curate in 2006 and was instituted rector in 2007.

Elaine said she was looking forward to the move ‘back home’ to Belfast. “I am excited about it, although my feelings are somewhat mixed as I have been very happy in my two parishes here.”

Elaine was instituted rector of Whitehouse and St Ninian by the Archdeacon of Connor, the Ven Dr Stephen McBride, Commissary to the Bishop of Connor.