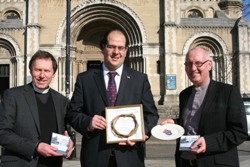 Mr Dorkhom is a member of the Greek Orthodox Church and has been in post in Dublin for nine years.  He explained how, although he is Palestinian by birth, due to travel restrictions he has never been able to visit his homeland.

The Palestinian Christian population has declined from 60 per cent to only two per cent in recent years and Mr Dorkhom said the challenge to the wider church throughout the world is to ensure that a Christian presence remains in the Holy Land.

During the Connor pilgrimage to the Holy Land which begins on Tuesday March 22, several projects run by Palestinians will be visited.

Archdeacon McBride commented: “It has been very beneficial to meet with both ambassadors and to hear two views on this very complicated political and religious situation.”