Looking back on the Connor pilgrims’ journey of faith 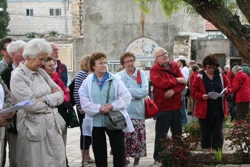 For the Connor pilgrims, the 11-day visit to the Holy Land may be over, but memories of the sights, smells, worship and fellowship they experienced there will remain with them.

The 85-strong group returned home on Friday evening, after a lengthy journey from Tiberias to Tel Aviv, Tel Aviv to Heathrow and finally Heathrow to Belfast.

Then it was onward to places like Ballymoney and Portstewart, Cloughfern and Dunmurry wrapped in the warmth of family and friends. 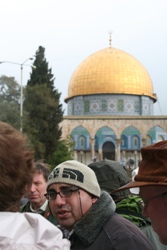 Their journey had taken them from the wet and windy lanes of the old City of Jerusalem where among many things they climbed the Via Dolorosa to the Church of the Holy Sepulchre, site of the crucifixion, prayed in the Church of All Nations in the Garden of Gethsemane, and took time for reflection at the Wailing Wall in the Jewish Quarter. They travelled to Bethlehem where they stopped at the place of Jesus’s birth and received communion in the Field of the Shepherds. They floated in the Dead Sea, and climbed high atop the ruins of Herod’s spectacular palace at Masada. They witnessed the genius of Herod’s builders in the ruins of the once magnificent port of Caesarea, and relaxed in the sunshine of Tiberias, where they experienced the calm of Capernaum, celebrated Holy Communion on the shores of the Sea of Galilee, and prayed, sang and reflected together on a boat which sailed across that very sea.

There were many other places to visit along the way, the Israel Museum, Qumran where the Dead Sea Scrolls were discovered, the Dome of the Rock, the Garden Tomb, the sycamore tree in Jericho, the breathtaking wilderness, the Upper Room, St George’s Cathedral where they joined with local Christians in Sunday worship, the colour and heady smells of the bustling souk. 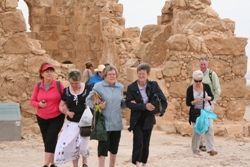 Then there was the extremely moving Yad Vashem Memorial to the Holocaust, and the equally moving Jeel al-Amal Boys’ home where the faces of children with so very little shone with joy and love. There were ruins at the Crusader capital Acre and Banias, churches high on the hills of Mount Tabor and the Mount of Olives and many other sites in between, wine to sample at Cana and fun and fellowship to be had at every step. Memories of the Sultan’s feast in the Golden Walls Hotel in Jerusalem will give rise to fond smiles for a long time to come.

Everyone who was able did a reading or prayer at the different sites visited along the way. These were wonderful and were prepared in advance by the pilgrimage leaders. 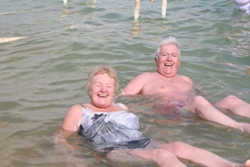 The trip was not without times of sadness and some incidences of illness. The bomb in Jerusalem on the first day in the city impacted heavily as the victim, Mary Gardner, was a close friend of one of the group, the Rev Mercia Malcolm. Mary had been on her way to meet Mercia at the pilgrims’ hotel when the bomb exploded.

The pilgrims missed the company of the Rev David Humphries, who was to jointly lead them along with Canon John Mann. Sadly, David took ill on St Patrick’s Day and was in hospital as the pilgrims departed. There was great joy to hear he had been allowed home, and David was at all times in the thoughts and prayers of the group. 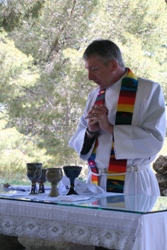 Many thanks are due to the Rev Jonathan Carmyllie, of the Diocese of Manchester, a friend of Canon Mann, who agreed to fill in at the last moment. Jonathan was an inspirational leader and by the end of the pilgrimage a good friend to all. The pilgrims will surely miss the timbre of his voice as he led them in readings and prayer.

The pilgrims crossed borders from Israel into Palestine and Syria, and looked across at the lands of Lebanon from the Golan Heights. The divisions within Israeli society between the Arabs and the Jews, and the small but vibrant Christian community, perhaps mirror in some way the divisions here in Northern Ireland. But everyone greeted the pilgrims with a warm welcome, whatever that person’s religious or cultural background.

At the final Holy Communion Service, on the Galilean lakeshore beside the Church of the Loaves and Fishes, Bishop Alan told the pilgrims he was back. This was a moment of great joy for the pilgrims as the Bishop has been ill for several months, and none will forget the emotions each felt as Bishop Alan sang the Blessing with only the birdsong and the gently lapping lake as accompaniment. 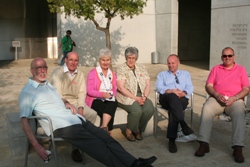 A huge thanks must go to Canon John Mann and the Rev David Humphries, for the planning and preparation of the pilgrimage, to Helen Mann who the group could not have done without, to Bishop Alan, his wife Liz and to the Archdeacon of Connor, the Ven Dr Stephen McBride for their friendship and good humour.

The  reports below (click to follow link) were written at the close of each day of the pilgrimage, and give more detail of the places visited. Photographs taken along the way can be found here – View pictures. The June issue of the diocesan magazine Connor Connections will feature a special report on the pilgrimage. 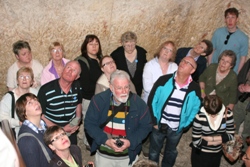 Finally, leader Canon John Mann shares his thoughts on the pilgrimage. "This journey of faith was one of the most exciting of things to be part of, as all the pilgrims shared together in readings and prayers and holy communion, but also in plenty of affectionate banter. Everyone seemed to get the balance just right between the intense concentration of following the way of Christ and relaxing in each other's company as we prepared for the next new experience.

"The pilgrimage was not without its health concerns and sadness, but there was an important sense of healing and support too, as we walked the way together. 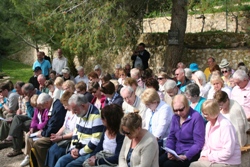 "For all of us, to hear the Bishop articulate that ‘he is back’ with us, as members of the Diocese of Connor, at the final Eucharist, was a moment of great joy – a return to health with renewed energy, and an answer to our prayers.”

Canon Mann concluded: "Helen and I find it hard to put into words the experience that this pilgrimage has been – a huge privilege to lead, with many unforgettable moments of shared singing, reading, prayer and relaxation in the land where Jesus walked." 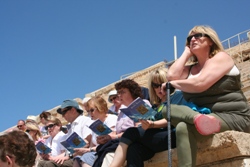 Final day in the Holy Land for Connor's pilgrims

Peaceful day in the steps of Jesus's lakeside ministry

Pilgrims make their way to the Sea of Galilee 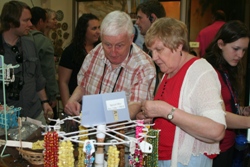 Pilgrims walk the Via Dolorosa

Pilgrims begin their tour of the Holy Land

Countdown to diocesan pilgrimage to the Holy Land 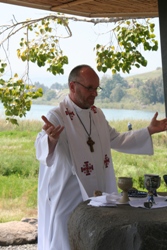 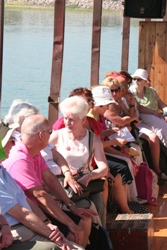 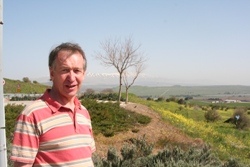 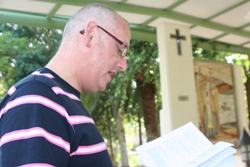