Three people from Connor Diocese will be travelling to Uganda during August 2011 to lead a youth camp for young people from Fields of Life schools.

Aynsely Gray, Holy Trinity Woodburn, and Sarah Nelson, St  Nicholas’ Carrickfergus, will be on the team with 15 other people. Team leaders are the Rev Alan McCann, rector of Holy Trinity, Woodburn, and Claire Andrews from Fields of Life.

The team will be in Uganda from August 4-16.   The Camp will be held at Grace High School, just outside Kampala, the first Secondary School built by Fields of Life.

The Camp is a six-day residential for the upper sixth form of all the FOL secondary schools in Uganda, and it is estimated that 300 sixth form students will be attending for the week.  The theme of the camp – ‘The Master’s Touch’ – will concentrate on bible characters whose lives were touched by God and who served Him in their lives.

Alan McCann said: “We also plan to teach the young people how to write up a CV, job interview skills and techniques, leadership programmes, sexual health programmes, drama and art worskshops, public speaking, worship/praise leadership and also a class on music appreciation – introducing them to Irish music and classical music.” 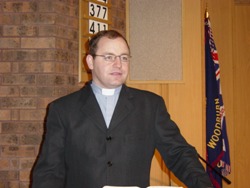 He continued: “We also hope to create some art murals in the art classes and around the school.  The camp will close with some community outreach programmes with all the students in a nearby trading station.”

The team will also visit a Christian ministry in a Kampala slum and hopes to call into an orphanage and some schools in Nakasangola – one of the more remote areas in central Uganda.

It is hoped members will have some free time towards the end of the trip to travel to the source of the Nile at Jinja and also to the Martyrs Memorial where Christianity first came to Uganda.

The team is an all Ireland team with some people from Bray parish coming along as well.  For many on the team this will be their first time in Africa and on such a mission team.  Claire Andrews and Alan McCann have led teams to Africa before and this will Alan’s ninth trip with Fields of Life to work with the secondary school students.

The team is seeking to raise £6,000 to cover the cost of the camp – each member of the team is raising their own finances to cover their individual expenses for the trip.  Anyone wishing to support the camp can send donations to Fields of Life (marked ‘Userve 2011’) or give through the Justgiving website http://www.justgiving.com/Alan-McCann

As part of the fundraising effort, a Fields of Life Charity Challege football match is taking place in Lurgan on Friday May 6. A Fields of Life Select XI will take on an Irish League Legends Select XI.

One of the players in the Irish League select is Kel McDermott, a member of Holy Trinity, and some of the finance raised will go to fund the Userve 2011 summer camp for sixth form students from the Fields of Life Schools. The match kicks off at 7.45pm and tickets are £10 or £3 for under 12s.