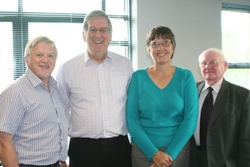 At two farewell meetings, CMSI supporters heard how much mission associates John and Poppy Spens had achieved in Southern Sudan – and a plea for another couple to follow in their footsteps.

Around 50 people listened to presentations from John and Poppy showing the work they have done in Connor’s link diocese of Yei and other dioceses in Southern Sudan at an evening event in Dromore, Co Down, on May 10 and a lunchtime meeting at CMSI’s Belfast office the following day.

Much of this work has been managed by CMSI who recruited John and Poppy on a short term contract back in 2005, when Yei mission partners Billy and Jenny Smyth took a decision to return home to Northern Ireland.

That short term contract eventually stretched to five years, and while John and Poppy have now returned to their home in Winchester, they have pledged to maintain their close relationship with Sudan. As CMSI Regional Mission Partner David Gough told the meetings “Southern Sudan is in their DNA.”

Connor people who attended the meetings included Archdeacon Stephen Forde, chair of Connor Council for Mission, who has visited Yei on three occasions, his wife Fiona who was part of the Connor META in Yei in July last year, Canon Cecil Wilson, former CMSI Director who recruited the Spens in the first place, and the Rev Simon Genoe, curate at Lisburn Cathedral, and Zara Wortley, also from the Cathedral, who will jointly lead a team to Yei in July this year. Bishop Moses from Wau Diocese in Southern Sudan was also present.

Acknowledging what John and Poppy have done over the years David Gough thanked them for ‘many great memories.’ “For me it has been an incredible journey. I have a great respect for this couple, for what they have achieved and the impact they have had.” But he said the greatest impact had been on the people on the ground in Southern Sudan. 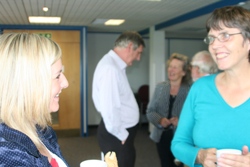 Poppy, who oversaw the management and expansion of the Martha Clinic in Yei, described her time in Sudan as ‘a fantastic five years.’ She highlighted some health related statistics, and outlined how she and John had secured funding for the various projects on which they embarked. Much of this had come from Irish Aid and the UK government as well as churches and individuals.

One of their key aims had been to reduce maternal and child mortality. “The problem is so big that what we have done is just a drop in a bucket,” she said. Health education and training as well as sustainability were also key targets.

Achievements had included the mobile clinic, the new paediatric and eye wards, assistance from an NGO specialising in HIV/AIDS, the training of 51 health staff and 100 MU members, the distribution of 7,500 mosquito nets and the tackling of water and sanitisation issues.

Poppy showed images of the Martha Clinic in Yei when the couple arrived in Yei in 2006, and the impressive building it is today. It now sees 2,500 sick patients and 900 ante natal patients a month.

The new children’s ward has the only cots in Southern Sudan, and the eye clinic carries out 47 cataract operations a week. “It was just amazing to see the guys the morning after their operations when their patches came off,” Poppy said. “One lady had never seen her grandchild, and another man had not been into town for 10 years because he couldn’t see to get there.”

She said projects were ongoing, including a partnership between Winchester Hospital and Yei Hospital.

Poppy told the gathering she had felt inadequate for the huge task that faced her, particularly in such a different environment and culture, so far from her own family, but she said there had been many blessings, not least the Sudanese people, of whom she said: “Their faith and joy is incredibly infectious despite huge difficulties.” 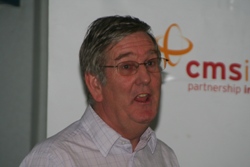 John Spens focused on church growth in Southern Sudan since 2006, saying the Episcopal Church of Sudan was undergoing somewhat of a revival. He talked specifically about the village of Panyana, close to the borders with Congo and Uganda, which lost the roof of its church to gales in 2008. With support from his home parish in Winchester Panyana  got a new roof.  And thanks to the Spens and their supporters including CMSI, it also became a stopping point for the mobile clinic, it got a brand new school, new latrines and boreholes, and has been the venue for two Bible Camps for young people. The village’s brass band – the only one in Southern Sudan – which used to borrow its instruments from Congo, now has its own trumpets and trombones!

Turning to Immanuel Cathedral, Yei, where John and Poppy worshipped on a Sunday, John spoke of the number of young people at services, about how it was standing room only at 7.30am each Sunday, about the improvements to the building funded by the congregation, the Alpha course they had introduced, and the library they set up for preachers. Was this a revival? he asked, adding that it was certainly an indication of ‘tremendous growth and tremendous life.’

John said that in his spare time he also built schools. He is on school number 10 at present [Connor Diocese funded the school in Mongo village which was officially opened during the META visit last summer].

John said the churches had played a major role in the peaceful referendum in Southern Sudan in January, in which the people voted unanimously to become an independent nation. The new Republic of Southern Sudan will celebrate its Independence Day on July 9 this year.  Looking to the future he said many people had returned to their homes in the south, but expressed concern about the unrealistic expectations there were about what the new government could achieve.

“Things will not be different overnight. It is going to take years to rebuild this nation which has suffered so much through war,” John said. Immediate needs included health, education, infrastructure and administration. Teachers, clergy and health workers all needed trained. Schools needed textbooks. He added that he and Poppy would continue to be involved in Southern Sudan for many years in whatever way God wanted them.

Before closing the meeting in prayer, Canon Cecil Wilson said to John and Poppy: “I am certain that in your ministry God has been at the core of what you have done. You built on the foundations laid by Billy and Jenny during a very crucial time in Southern Sudan. We will need to look for another couple like Billy and Jenny and John and Poppy to continue this work.”