The Open Hands community group set up by the former committee of St Luke’s Parish Church held its first local initiative on Friday May 27.

The group, which will be based in St Luke’s Church beside the ‘peaceline’ in Northumberland Street, unveiled a mural created by young adults from both sides of the interface. St Luke’s closed for worship in 2006 when parishioners joined with St Stephen’s at Millfield.

The launch, which attracted considerable interest both locally and from the media, was held in partnership with the Upper Springfield Development Trust and the Shankill Women’s Centre, and was part of Community Relations Week. 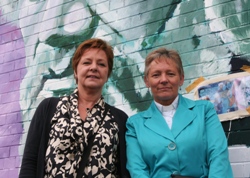 The speaker at the launch, which included music and refreshments in St Luke’s Parish Hall, was Duncan Morrow, Chief Executive Officer of the Community Relations Council.

The mural is the outcome of a number of anti-racism art workshops run by local artists Danny Deveney, Mark Ervine, Marty Lyons and Matthew Morgan, who have worked with young people from both the Shankill and the Falls. At its centre is Frederick Douglass, an American social reformer who escaped from slavery and went on to become a leader of the abolitionist movement. 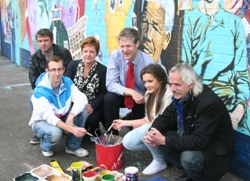 Speaking at the launch, Mr Morrow said the mural was not about removing paramilitary murals, but was about re-imaging. “It is about saying we have been through a bad and difficult time in our history in which these communities have suffered more than most. But now we are going down a path towards our future.”

He said art can make a difference about how people view the place they are in. In this case, the mural made ‘a bold statement against slavery,’ and had been created by people from both communities. “I hope this is not just an object but something that everyone owns,” Mr Morrow said. 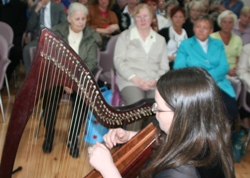 Tracey McRory, a renowned musician and composer, enthralled everyone present with one of her own compositions on the harp and pupils from Malvern Primary School sang two songs beautifully.

Claire Hackett, From the Falls Community Council, described the Open Hands Centre as a ‘brilliant development’ which would provide opportunities for building relationships, opportunities and learning.

The Rev Edith Quirey, rector of St Luke’s and St Stephen’s, said the launch had been ‘absolutely fantastic.’ “I am overwhelmed, the support of the two communities is so important,” she said. “This is the first of many projects we hope to put on to bring the communities back together into shared space, just as St Luke’s did when it was a parish and held a lot of cross community services.” 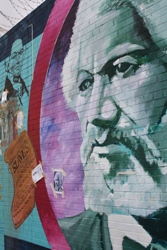 Plans to re-open St Luke's as a cross community centre