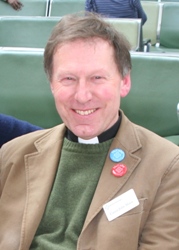 The Rev Canon John Mann, rector of St John’s Parish, Malone, has been appointed Dean of Belfast Cathedral. His institution and installation will take place on August 30.

The appointment was announced by the Board of Nomination of St Anne’s Cathedral on Thursday June 9. Canon Mann succeeds the Very Rev Dr Houston McKelvey, OBE, who retired as Dean at the end of March.

Canon Mann, 56, was born in Blackheath, London. He was ordained a deacon in 1979 and a priest in 1981. He was educated at Clark’s College, Romford, Essex; the Royal Liberty School, Romford; Queen’s University, Belfast, and the Church of Ireland Theological College.

He is married to Helen, a Practice Nurse, and the couple have a daughter, Rowan and a son, David.

In 1993 Canon Mann returned to Connor and the Parish of Cloughfern as rector, and in 2002 he moved to Malone.

In his ministry, Canon Mann has been a rural Dean of Alton (Winchester); a chaplain to Whiteabbey Hospital; a tutor for the lay reader course in South Connor and General Secretary of the Church of Ireland Men’s Society. He has been Examining Chaplain to the Bishop of Connor since 1994, and Director of Continuing Ministerial Education in Connor Diocese since 2001.

In 1999 Canon Mann was installed a Prebendary of Clonmethan in the National Cathedral of St Patrick’s, Dublin, representing Connor Diocese.

He is a member of the Representative Church Body and the General Synod, the Church of Ireland Library and Archives Committee, Connor Diocesan Board of Patronage, Diocesan Executive Committee, Diocesan Council, Diocesan Court and Joint Committee. Canon Mann is also on the group facilitating the development of pastoral support in Connor and serves as a spiritual director.

Canon Mann has been speaker at a number of retreats, quiet days and clergy conferences. He has led pilgrimages to the Holy Land, most recently taking a large group from Connor Diocese in March this year, as well as to Oberammagau and Iona.

The new Dean has an interest in music, and for pleasure and relaxation plays the violin and piano and enjoys singing, playing tennis, walking, studying natural history and gardening.

Before his ordination, Canon Mann worked for the Isle of Man Railways on the vintage electric tramway from Douglas to Ramsey.

He said it was a great privilege to be appointed Dean of Belfast: “St Anne’s Cathedral is one of the wonderful buildings of a city that I have come to love since arriving in Belfast as a raw undergraduate in 1973.  Since then through years of change and development and a great deal of suffering and division, we experience the vibrant life of a city whose heart beats through the hopes and dreams of a new generation.

“It is such a great responsibility to be offered the chance to share in this new life, whilst the Cathedral takes its part in carrying the pain that we know is the daily burden of many, as together a path is forged to find hope in a difficult economic climate.  The Cathedral lies within a quarter of the city that bears its name, that burgeons with artistic talent, and is creating a compelling centre of student life as well as experiencing the gradual regeneration of its abandoned buildings, set amidst the sparkling new restaurants and coffee shops of its cosy nooks.

Canon Mann continued: “As Dean, I look forward to donning the black garb of the fourth in the line of clerical Santas, come December this year.  These charitable collections fulfil a deep and real need and provide a lifeline for many.

“One of the attractions and privileges of the office of Dean of Belfast is being involved in all aspects of the City’s life and to prayerfully carry it within, as day by day we hold the light of Christ for those in darkness.  I cannot find the words to express how deeply the privilege of being given this work affects me, but I hope that given the strength and health necessary, I may serve the Cathedral community and the wider life of the city to the best of my ability in the years that lie ahead.”

Canon Mann said he had been ‘shocked’ at his appointment, and spoke of his gratitude and sadness at leaving St John’s Malone, which he described as ‘a very special place.’

“To see in print or on a website that one has received a new office in the Church is a strange sensation,” he said.  “I suppose shock is nearer the mark.  ‘Is that really me?’ thinks I, as the title ‘Dean of Belfast’ is casually displayed in proximity to my name.

“So the reality sinks in, and the challenges and joys, the anxieties and the opportunities sweep by, and I think of the leaving of the parish of which I have been a part for the past nine years, and the freeing to others of the plans and dreams that I had been cherishing for the autumn and beyond.  St John’s Malone is a very special place that I shall leave with immense gratitude for all that it has given to me, with thanksgiving for many happy days, and with sadness as Helen, Rowan, David and I part from people we have come to know and love dearly.”

The Bishop of Connor, the Rt Rev Alan Abernethy, Chairman of the Board of Belfast Cathedral, said: “I am delighted that Canon John Mann has accepted the appointment to be Dean of Belfast. His wisdom, his deep spirituality, pastoral heart and love of liturgy and music will be a great gift to the Cathedral, its congregation, to the City of Belfast and to the wider church.”