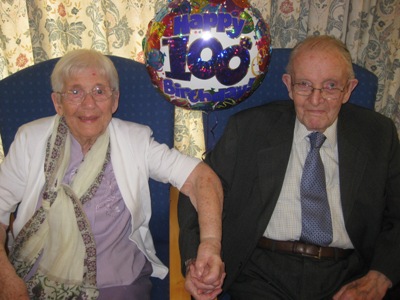 Magheragall parishioner Wilma Hutchinson celebrated her 100th birthday on May 27 with a party at Blaris Fold Lisburn.

Wilma, not one for a fuss, was persuaded that the day could not go by without a celebration, so the Fold organised a party for all the residents and a number of invited guests.

The rector of Magheragall, the Rev Nicholas Dark, represented the parish and joined family members, friends, residents of the Fold and the Mayor of Lisburn, Councillor Brian Harding, to celebrate Wilma’s birthday.

Wilma and her husband Kyle, a young 98, joined the parish in the time of Canon Musgrave, although Wilma came to Magheragall Parish Church for the first time with Emily Nesbitt, the wife of her cousin the Rev John Nesbitt, who was the son of the Rev Samuel Nesbitt, rector of Ballynure and Ballyeaston from 1896 to 1926. 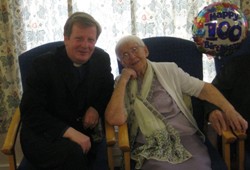 Wilma grew up in the townland of Toberdowney in the Parish of Ballynure where her father was a local farmer. She attended the Presbyterian Church as a child but has many fond memories of life at her uncle’s Rectory in Ballynure. She remembers going out to the shed with cousin John with a candle and a bucket to milk the two Rectory cows. The candle apparently sat nicely on the back of the cow and illuminated the shed!

There aren’t too many rectories with dairy cattle out the back today and that little story illustrates just what change Wilma has witnessed during her life. Change that Irish President Mary McAleese alluded to in her birthday greetings to Wilma, saying: “Born as you were in the second decade of the twentieth century, you have lived through remarkable times in the history of Ireland and the world. You have witnessed remarkable changes, in lifestyle and technological development, unimaginable at your birth in 1911.” 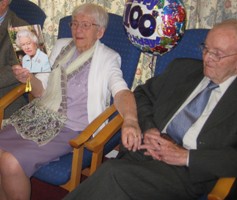 As she turned 100, Wilma was able to say that she is still happily married and that in itself is quite remarkable. She married husband Kyle from Dromore, Co Down, in June 1946, and Kyle is now looking forward to his 99th birthday. They have two sons, John and Geoffrey, two grandchildren Nina and Kyle and one great granddaughter, Lucy.

Wilma was a teacher and one of the tributes to her at her party was the presence of one of her first pupils from the school in Rasharkin were she started her teaching career some 80 years ago.

Longevity always prompts the question, what is your secret, and Wilma was ready with her answer “walking and talking.”

Wilma received more than 50 cards and letters including cards from the Queen. the President of Ireland, the Bishop of Connor and the rector and select vestry of Magheragall Parish.