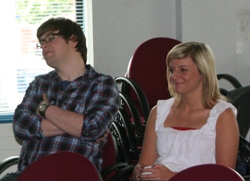 A young team from Lisburn Cathedral will travel to Connor’s partner diocese of Yei, South Sudan, in the two weeks before the country celebrates its independence.

The Mission Experience Team Abroad, led by the Rev Simon Genoe, curate at the Cathedral, and youth worker  and schoolteacher Zara Wortley, will run relationship workshops and youth mission in both Yei town and Mongo village.

The trip has been facilitated by CMS Ireland, and David Gough and Gillian Maganda from CMSI will be involved in a commissioning service for the team at Lisburn Cathedral on Sunday June 19.

Other team members are: Matthew Bell, who has just graduated from Belfast Bible College, Grace Fullerton, a church warden at the Cathedral; Michael Wright, who is studying sound engineering at Leeds Metropolitan University; Victoria Bell, who is studying French at Queen’s University, and Lauren Elliott, who at 18 is the youngest member of the team and has just finished her A Levels at Wallace High School.

They depart for Africa in the early hours of June 26, and spend two nights in Entebbe, Uganda, before flying on to Yei. Then it will be onward to Mongo village along a dirt track road.

Connor has a strong link with Mongo village, having raised the funds to build a school there which was officially opened when a Connor team visited in July 2010.

The group will stay in a traditional tukul which is being specially built for their visit, and they will run courses for young people over three days. At the request of Bishop Hilary of Yei, the group will run relationship courses from 9am to 12 noon each morning. These will be for pupils of Mongo School, and it is expected up to 70 could attend the sessions in Mongo Church each morning.

Relationship advice is something Zara, who runs Romance Academy at Lisburn Cathedral, is involved in at home, and the group has been trained to deliver a variation on the Romance Academy programme which will be culturally appropriate to Sudan.  The first session will look at building relationships, the second will look at love, and the third topic will be peer pressure and making decisions.

The Lisburn team has funded lunch for the young people each day, which will be organised by their facilitators in Yei, Philliam Okpoa of the Scripture Union and Yei Diocesan Youth Worker Elioba Amule.

In the afternoon even more young people are expected to attend the Youth Mission Sessions, which will look at three aspects of God – as a buyer, as a Master and as a sower.

Each evening in Mongo, the team will show one of three films: Indiana Jones; The Fugitive and National Treasure, and discuss the message from these with the young people.

After their three busy days in Mongo, the team will have the Saturday off to return to Yei where on Sunday they will attend services in Immanuel Cathedral and in St Paul’s Parish. Simon will be preaching in the Cathedral while Zara will talk in St Paul’s. The group will stay in the ECS Guesthouse which is run by the Diocese of Yei.

On the Monday, Tuesday and Wednesday the team will again deliver the relationship sessions, youth mission and movies.  In both Mongo and Yei they will be using translators to get their message across to the young people.

The Cathedral team will leave Yei on Thursday July 7, two days before the country officially marks its independence from North Sudan, an independence which the people voted for unanimously in a referendum in January this year.  Prior to the signing of a peace agreement in 2005, Southern Sudan had suffered decades of civil war, the legacy of which still impacts on its people.

Simon admitted that while many of the team members have travelled in the past, they were all a little apprehensive about what lay ahead.  “We are a close team and we get on really well,” he said.  “Zara is really passionate about the relationship training, and a lot of the team have been through her programme as participants. For me the youth mission will be one of the most exciting parts of it.”

There has been considerable work done by the Cathedral team in not only preparing for their teaching, but in fund raising. Two events have helped considerably, a fashion show at Wallace High School in April raised almost £5,000, while a parish breakfast raised £1,000.

The Commissioning Service in Lisburn Cathedral is at 11am on June 19. You can download a Prayer Letter here.