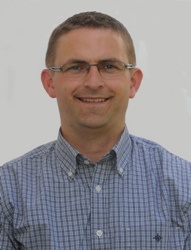 The Rev Stephen McElhinney, curate of Drumglass Parish, Dungannon, has been appointed priest in charge of St Columba’s, Derryvolgie.

A service of introduction will be held on September 6 at 7.30pm.

The 41-year-old is the son of Cyril and the Rev Liz McElhinney. Cyril was actively involved in parish redevelopment initiatives around Ireland. Liz, formerly a teacher at Portadown Technical College, was ordained in 1997; she was curate at Magheralin Parish (1997-2001) and rector of Calry Parish, Sligo (2001-2007) and is still actively involved with speaking engagements.

Born in Manchester, Stephen moved to Lurgan in 1973 where he attended King’s Park Primary School, Lurgan Junior High and Lurgan College. He graduated in Optometry from Aston University and after two years working in the north of England, he returned to Ireland to complete a voluntary year in Cork in 1994-94.

He is married to Cathy, nee Suffern, from Ravarnett and in 1997 the couple travelled around the world for a year. They now have three children Ruby (10), Patrick (9) and Scott (5).

Following his ordination Stephen served as a member of the staff team of Kill O’ the Grange Parish Church, Dublin, before moving in May 2008 to Drumglass Parish, Dungannon.

Stephen enjoys the outdoors, cycling, windsurfing, sailing, paddling and hiking, and he describes Jesus as his passion. Stephen said he was looking forward to his return to Lisburn where his main priority will be getting to know the people from Derryvolgie Parish and the local community.