Congratulations to a group of parishioners from Ballynure and Ballyeaston who joined others from churches in Ballyclare to complete a fundraising ‘Four peaks’ challenge.

The 16 men successfully climbed the four highest peaks in the four countries of the United Kingdom –  Slieve Donard, Snowdon, Scafell Pike and Ben Nevis. Their efforts raised funds for The Royal Hospital for Sick Children, a church roof fund and ‘Tiny Life’ – a premature baby charity. 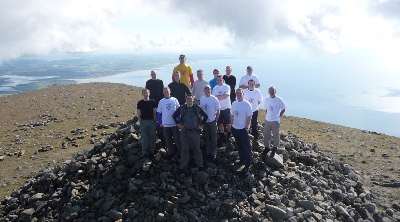 The group completed the climb over the weekend of June 10-12, beginning with Slieve Donard on Friday morning, followed by a ferry from Dublin to Wales and then a night out in Bangor –for morale purposes!

They had a 4:30am start for Snowdon followed by a drive up to the North West of England to ascend Scafell Pike on Saturday evening.

The group got about four hours sleep in a Glasgow Travelodge before another early morning start to drive up to Fort William for the Ben Nevis climb – bravely saving the highest mountain for last!

So after climbing 13,967 feet, driving 821 miles, hiking for 18 hours and spending 36 hours crammed into a mini-bus the 16 team members returned home feeling a small amount of elation and a large amount of fatigue!

Graeme Reid, one of the team leaders, said: “Several members of the group came up with the idea to do this as part of the combined men’s ministry for the Church of Ireland in Ballyclare and Ballynure.  It was a bit of a departure for us as we usually meet for Saturday morning prayer and fry-ups!

“We extended the invitation to others we know and it has been great to do this alongside men from other churches in the area.  We all feel great having completed it but more importantly we have been able to raise almost £7,000 so far for charitable causes.”

Also involved in organising the event was Andrew Brannigan, Youth Officer for the Diocese of Down and Dromore and a member of St John’s, Ballyclare. “Despite the tiredness, aching limbs, mental fatigue and endless packets of garage-bought sandwiches, we all really enjoyed this challenge!” Andrew said.

“We were blessed with great weather, no safety issues, and great company.  It was a good chance to get to know better the other guys on the team, although most of the talking was on the way down, rather than up the mountains!”

Andrew added: “We are also really grateful to our churches, friends, family and work colleagues for all their support and sponsorship.  The money raised will go to a couple of charities for babies and children that are close to some team members hearts, and also towards a roof repair fund for the United parish of Ballynure and Ballyclare, the church most of the team members belong to.”