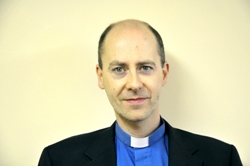 The Rev Canon Tim Close, Dean’s Vicar and minister-in-charge at St Anne’s Cathedral, Belfast, has been appointed rector of All Saints Eglantine Diocese of Connor.

Tim, who is originally from Carrickfergus, is married to Amanda who is a teacher. He is a graduate of Queen’s University, Belfast, the University of Leicester, and Trinity College Dublin.

Tim was ordained to serve as curate-assistant to the Venerable Archdeacon Gordon Linney in the Parish of Glenageary, Archdiocese of Dublin. He later returned to Northern Ireland to serve as Dean’s Vicar to the Very Rev Dr Houston McKelvey, Dean of Belfast.

Tim said he is looking forward to meeting the community at Eglantine Parish and to the challenge of ministry in a rural context.

His institution as rector of Eglantine will take place on Monday October 24 at 8pm.