Installation of new Dean of Belfast 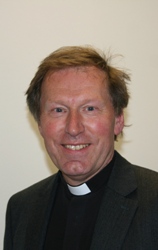 The Rev Canon John Mann will be installed as Dean of Belfast at a service in St Anne’s Cathedral on Tuesday August 30 at 8pm.

The service, in which the new Dean will also be instituted as Vicar of the Cathedral Parish, will be attended by representatives of community life in the city, visiting Bishops and leaders of the other main denominations in Northern Ireland.

The Dean–elect will be presented for institution into the Cathedral Parish by the Archdeacon of Belfast, the Ven Barry Dodds, and the Act of Institution will be conducted by the Bishop of Connor, the Rt Rev Alan Abernethy. Canon Mann will be installed as Dean of Belfast by the Cathedral Chancellor, the Archdeacon of Down, the Ven Philip Patterson. He will then be presented to the people by the Bishop of Connor, and welcomed by the Very Rev Hugh Kennedy, Administrator of St Peter’s Cathedral, on behalf of all the church leaders.

During the service the new Dean will be presented with symbols of the teaching, pastoral and sacramental ministry of an incumbent. These will include a Bible (to preach the Good News of Jesus Christ), a container of water (recognising that the Cathedral is a place of Christian baptism), a Book of Common Prayer (demonstrating the primary role of the Dean to lead public worship and encourage a life of personal devotion), bread and wine (the elements of holy communion), oil (symbolic of healing and reconciliation), the key to the Cathedral (as a reminder that the Cathedral is a place to be kept open for all people) and a towel (as a reminder of Christ washing his disciples’ feet and of the ministry of service and support of those in need and in trouble).

The service is in three parts, beginning with Evening Prayer followed by the central section which formally and legally institutes and installs and welcomes Canon Mann. A period of silence and reflection will follow the sermon which is to be preached by the new Dean. The congregation will be asked to quietly consider the nature of commitment to any task, great or small, the focus shifting from the particular emphasis on the Cathedral and its ministry, to the general.

This unusual component has been included at the request of the Dean–elect and with the permission of the Bishop. It will include music played on the harp, a soloist singing and a period of stillness and silence. After this the congregation will be led in prayer by the Monks of Holy Cross Monastery in Rostrevor, a community committed to unity and reconciliation.

Dean–elect Mann said: “I am looking forward to starting at St Anne’s and being part of what is a wonderful place with many fine people. The cathedral is very light and bright and reflects the past in works of art and symbols of faith and work and the vision of its architects and builders. It also stands as a constant reminder of the place of Christian worship at the heart of many people’s lives, especially at moments of both celebration and grief.

“It is a place where the individual can find a quiet place for prayer, and where the crowd may gather in sorrow or joy and unite its heart as one.”

Canon Mann (56) has been rector of St John’s Parish, Malone since 2002. He was born in Blackheath, London, and was ordained a deacon in 1979 and a priest in 1981. He was educated at Clark’s College, Romford, Essex; the Royal Liberty School, Romford; Queen’s University, and the Church of Ireland Theological College.

The Dean–elect is married to Helen, a Practice Nurse, and the couple have a daughter, Rowan and a son, David.

Canon Mann was curate assistant at Cloughfern Parish, Diocese of Connor, from 1979–1982 and at Knock Parish, Diocese of Down, from 1982–1985. In 1985 he was appointed rector of the grouped parishes of Ballyrashane and Kildollagh, Diocese of Connor, where he remained until 1989 when he went to the Diocese of Winchester as rector of the Parishes of Bentworth, Shalden and Lasham. In 1993 Canon Mann returned to Connor and the Parish of Cloughfern as rector, and in 2002 he moved to Malone.

In his ministry, Canon Mann has been a rural Dean of Alton (Winchester); a chaplain to Whiteabbey Hospital; a tutor for the lay reader course in South Connor and General Secretary of the Church of Ireland Men’s Society. He has been Examining Chaplain to the Bishop of Connor since 1994, and Director of Continuing Ministerial Education in Connor Diocese since 2001.

In 1999 Canon Mann was installed a Prebendary of Clonmethan in the National Cathedral of St Patrick’s, Dublin, representing Connor Diocese.