Menu
Home > News > Stepping into the past at Ballymacash festival

Stepping into the past at Ballymacash festival 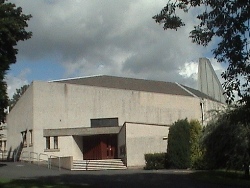 A Festival of Flowers at St Mark’s, Ballymacash, will also celebrate the history of the parish which dates back to 1892.

The festival takes place over the weekend Friday October 7 to Sunday October 9, and marks the completion of a recent renovation scheme in the old church.

Entitled ‘Celebration,’ the festival of flowers will be designed and co–ordinated by world–renowned flower artist, the Rev William McMillan, MBE, and members of Ballymacash Flower Club. Opening times are listed below.

The aim of the historical exhibition is to trace the development of the church and community in the Ballymacash area from the 17th century.

The boundary of the Parish of Ballymacash encapsulates the northern suburb of Lisburn, and the vast majority of people residing in the area belong to families who have lived in the area for a relatively short period of time.

The exhibition will provide them with a valuable opportunity of learning more about how a sparsely populated rural community developed into a burgeoning suburb of Lisburn City.

St Mark’s Church has played a central role in the community for well over a century. The forerunner of the present church (consecrated 1975) was a small Chapel of Ease erected in 1892 and the report of the opening ceremony in the Irish Ecclesiastical Gazette (8/4/1892) referred to its location as ‘a remote part of the Parish of Derriaghy.’

St Mark’s has come a long way from those days of a remote rural community, and the exhibition will endeavour to tell the story of the parish’s development by putting on display documents, photographs and artefacts.

The story begins with the Rev Philip Johnson (1748 – 1833) who played a significant part in the church and civic affairs at the end of the 18th and the beginning of the 19th century. As well as being Vicar of Daringly (1772 – 1833), he was a Magistrate for County Antrim, Captain of Ballymacash Light Infantry, Grand Chaplain of the Orange Order in County Antrim and founder of the original Ballymacash School c. 1790.

He was a prominent political figure in the troubled years leading up to the 1798 Rebellion and his residence, Ballymacash House was the focus of various important activities in the locality right up to the middle of the 20th century.

Life in Ballymacash was very much linked with the church. For example, the Rev Joseph Atkinson Stewart who lived at Killowen House (now the site of Laurel Grove housing estate) was not only the prime mover in the provision of the church on the Nettlehill Road in 1892, but provided employment for many people living in the area which, in the course of time, became north Lisburn.

Profiles are included of elderly residents who had clear memories of life in the area at the time of the Great War, 1914 – 1918. Early photographs include staff and pupils of Ballymacash School c. 1912, a demonstration by the Ballymacash Unionist Club at Ballymacash House on August 31 1912 and a group of Orangemen assembled for the opening of Ballymacash Orange Hall in 1906.

Another interesting section of the exhibition will include a feature on the Ballymacash Motorcycle race held after World War II known as the “Lisburn 100.”

As well as the extensive display of photographs, the exhibition will include bound parish magazines dating back to the 1930s; old Sunday School registers and certificates; a copy of the minute–book kept by Ballymacash Unionist Club 1912 – 1920; ordnance survey maps showing the progress of urbanisation; extracts from early 19th century Orange Lodge records; a copy of Benjamin Workman’s journal containing early 19th century references to the area and a collection of hundreds of newspaper cuttings relating to events in the area from the 18th century.

There should be much in this exhibition to attract not only those who have long associations with this area of North Lisburn, but many people who have moved to Lisburn in recent times.

St Mark’s Parish Church is located in the north Lisburn area, on the A30, Ballymacash Road, Lisburn, (BT28 3EZ) off the Prince William Road, heading towards Glenavy.

Festival times and admission charges are as follows:

Teas, refreshments and light lunches are available throughout the festival.

Children under 12 half price.