Installation of new Dean of Armagh 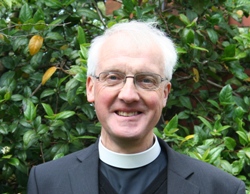 The former rector of St Matthew’s, Shankill, the Rev Canon Gregory Dunstan, was installed as the Dean of Armagh at a service of Evensong in St Patrick’s Church of Ireland Cathedral, Armagh on Sunday December 4.

The Archbishop of Armagh, the Most Rev Alan Harper OBE, presided at the service and the Bishop of Connor, the Rt Rev Alan Abernethy, gave the address.

The new Dean succeeds the Rt Rev Patrick Rooke, who is now Bishop of Tuam, Killala and Achonry. Dean Dunstan was rector of St Matthew’s, Shankill, Belfast, from 1993 to earlier this year and was elected to the chapter canonry of St Patrick’s Cathedral, Dublin in 2007. He has been chairman of the Down and Dromore & Connor Organ Scholarship Management Board since 2005.

Formerly a landscape architect, Dean Dunstan, who hails from England, trained at the Church of Ireland Theological College and Trinity College Dublin, and was ordained for the curacy of Ballymena in 1990.

On his appointment by the Archbishop of Armagh as Dean of Armagh in September this year, the new Dean said: “As one of the historic centres of Christianity in Ireland, Armagh has enormous resonance for people throughout the island. I look forward to ministry with the whole Cathedral community in Armagh, to the developing partnership with the Catholic Cathedral, and to the contribution both cathedrals make to the life of the city.”

In his address on Sunday, Bishop Abernethy commended Dean Dunstan saying: “Gregory is a holy man with a pastoral heart.” Focusing on the Advent season, he went on to say: “Advent allows us to focus on how while God can be way beyond our understanding yet we receive His presence among us, at the same time distant yet so close.”