Songs of Praise a ‘magnificent experience’ 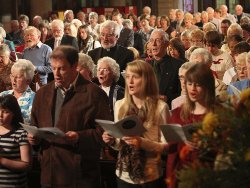 St Thomas’s Parish Church, Belfast, hosted BBC’s Songs of Praise recently in a service described by the rector as a ‘magnificent experience.’

The Songs of Praise crew recorded not one but two services. The first, broadcast on Sunday November 20, was on the theme of ‘Doubt.’ A second recording will be broadcast on March 11 next year to commemorate the 100th anniversary of The Titanic.

For four days the recently renovated Church was a hive of activity – scaffolding erected, banks of lights fixed in place, microphones and cameras strategically located; and outside in the grounds the control room in a massive 40–foot vehicle. The scene was set for recordings of 10 hymns on two evenings.

The BBC had carefully and sensitively selected the hymns related to the themes of ‘Doubt’ and ‘Titanic’. The lyrics and tunes combined to make the singing moving, inspirational and memorable.

The rector of St Thomas’s, the Rev Canon Walter Lewis, said: “The large gathering of people and orchestra will carry the exceptional experience with them for the rest of their lives.”

The rector added: “ I venture to say that, as we all look back, we will say, ‘Yes, God was indeed there! What a magnificent experience!’ And, when the broadcasts are transmitted to some three million people I will be surprised if viewers are not similarly inspired, helped and blessed by God.”

More photographs of the recordings can be viewed in the What’s New section of the St Thomas parish website.