Black Santa to reflect daily on his Christmas sitout

The Dean of Belfast’s Black Santa sitout for charities 2011 runs from 8.45am on Saturday December 17 and continues until Christmas Eve.

The Very Rev John Mann, installed as Dean in August, will reflect on his daily experiences in a column in the Belfast Telegraph which will run from Monday December 19 until the sitout ends.

In this his first sitout, the Dean has set a fundraising target of £201,100, representing £100 for every year since Jesus was born. This year almost 200 charities have applied for some funding.

Launching the Black Santa Appeal, Dean Mann said: “As I read through the submissions, the need is clear, and my hopes rise for these organisations, as we see what small sums of money can do in the hands of dedicated volunteers.” 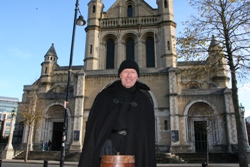 the day before the sitout began, the Dean revealed that almost a quarter of the total had already been donated through postal donations. He said he was hopeful of achieving his target. “I am very optimistic that we will get the money and that it will come from hundreds of people.”

Thanks to Florence Ringland, aged 93, Dean Mann will have a nice warm neck during his hours on the Cathedral steps.

A resident of Bethany Nursing Home in Osborne Park, Florence has been knitting a lovely multi–coloured scarf for the Dean ever since she heard he was leaving St John’s Malone for St Anne’s.

Dean Mann held regular services in the Bethany Home for the residents during his time at St John’s, and when he returned on December 15 for a Carol Service Florence presented him with his timely gift.

Sheila Gibson, who organises the services, said: “Florence took great pride in knitting the scarf for the Black Santa. She had to do it a little bit at a time because she as pains in her hands and her shoulders but she has done a fabulous job!”

More information on the Black Santa tradition can be found on the Cathedral website.