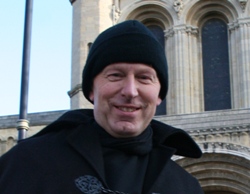 The Dean of Belfast has said a big thank you to everyone who supported the 2011 Black Santa Sit–out Appeal.

Monies raised through the eight–day sit–out, which concluded on Christmas Eve, are still being tallied before they are distributed to dozens of local charities who have applied for funding. Fifteen per cent of the total will be sent overseas through the auspices of Christian Aid.

The Very Rev John Mann, who was installed Dean in St Anne’s Cathedral last August, paid tribute to everyone who contributed to the appeal, either financially or by lending their support in some other way. This includes the Canons of the Cathedral, the Bishops and the sextons who joined him outside on the steps.

Administrative staff and volunteers from the Cathedral community have put a huge amount of time and dedication into managing this annual event and supporting the Dean, who was collecting donations outside the Cathedral 90 per cent of the duration of the sit–out, come rain or shine.

Dean Mann had set a target of £201,100 – representing £100 for every year since Christ was born – and while the final amount may fall a little short of this, he said the appeal had still met a phenomenal response.

“Although we may have fallen short of the target unless we get some big late donations, we still recognise that in the current financial times to raise what we have in just a few weeks is really remarkable and I would thank everyone who contributed in any way,” he said.

Dean Mann paid particular tribute to the local media who he said he been so positive about the sit–out, encouraging people to come along and support it.

“It has been a lot more time–consuming than I expected, but the spin–offs have been well worth it,” said the Dean. “Not only did I meet so many people in the street but I have made great contacts with local charitable organisations.

“The weather was kind and we only had a couple of rainy days.” He added: “People’s generosity is very affirming.”

The Cathedral services over the Christmas period also proved very popular, with 900 in attendance at the Carol Service on Christmas Eve, and 400 at the midnight service.

The funds raised from the Black Santa Sit–out 2011 will be distributed at the annual Good Samaritans Service to be held in the Cathedral on Sunday February 5. Donations will be gratefully accepted until January 20.