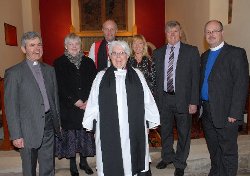 The Rev Helen MacArthur was introduced as Non–Stipendiary Priest–in–Charge of the Ardclinis and Tickmacrevan, Layde and Cushendun Group of Parishes on Sunday January 8.

The Bishop of Connor, the Rt Rev Alan Abernethy, officiated and Rural Dean the Rev Mark Taylor, rector of Whitehead and Islandmagee, led the devotions.

Helen, who is 66, previously worked in nursing, beginning her career in 1962 and taking early retirement from her post as an orthopaedic nurse tutor in 1997. She trained as a diocesan lay reader, but went back as a staff nurse in Thompson House, Lisburn, for a further 10 years.

During this time Helen continued as a lay reader, and in 2005 she gave in to the call she had had to ordination. She trained for three years at the Church of Ireland Theological Institute, Dublin, and was ordained a Deacon in 2008 and a Priest in 2009.

She was curate assistant in Derriaghy Parish for three years prior to her appointment to the Glens’ churches.

Originally brought up in Holywood Parish, Helen was later a Sunday School Superintendent in Eglantine for many years. She said she was looking forward to the challenges ahead.

“I am looking forward to meeting and getting to know the people of the Glens and to taking my three dogs for walks at the seaside – if I get the time,” she said. “I am also looking forward to the challenge of being in a parish on my own.”

Speaking at the service of Introduction, Helen said she had received the ‘warmest of welcomes’ in the Glens.