Joy for charities as Black Santa cheques are distributed 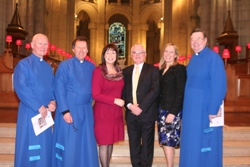 The annual Good Samaritans’ Service in St Anne’s Cathedral on Sunday February 5 was indeed a ‘day for joy,’ as predicted by the Dean of Belfast, the Very Rev John Mann.

More than 200 cheques totalling over £180,000 were presented to representatives of charities in the community and voluntary sector during the special service.

The money was raised during the 2011 Black Santa sit–out which took place in the week before Christmas and involved the Dean and members of the Cathedral Chapter.

During the Good Samaritans’ Service, the three distinguished guests who had each given up their time to present the cheques all paid tribute to Dean Mann and his team. 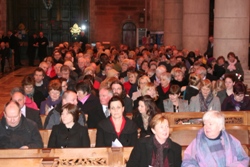 BBC newsreader Donna Traynor, who presented the cheques to organisations working with children and youth, was applauded warmly when she told the congregation that thanks were due to the Dean and his team who had stood on the Cathedral steps all day for a week collecting funds on the charities’ behalf.

Lady Rachael Gregson, who supports a number of charitable endeavours, presented cheques to community service groups. She thanked Dean Mann for his incredible fundraising efforts and said the number of charitable organisations present at the service was an indication of the way people in Northern Ireland care for others.

Cheques for work with family related groups, medical organisations and international projects were distributed by Professor Alastair Adair, Pro Vice–Chancellor of the University of Ulster. “What a good news story this is,” Professor Adair said. He thanked all who had contributed to the Black Santa Appeal and the charities for the work they do. 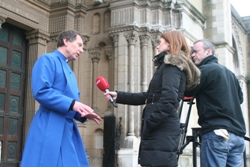 Extending his thanks to Dean Mann and his team, the Professor said: “Since meeting the new Dean I have been inspired by his vision for the future of the Cathedral and for a shared future in Northern Ireland.”

The Black Santa tradition began in 1976 when Dean Sammy Crooks staged a vigil on the steps of the Cathedral to beg for poor and charitable causes. His black Anglican clerical robe earned him the name Black Santa which has stuck over the years and is now a festive tradition in the heart of Belfast.

Dean Mann was installed as Dean in August 2011, and this was his first year as Black Santa.

“We need to celebrate these things and be encouraged by one another,” he said. “The hours of service to the community and further afield that are represented by you all are not for me to praise, I cannot though but stand in awe of the commitment that you share, whatever your particular charitable interest. The work is immense.”

The Dean urged the charitable sector not to accept a Cinderella complex, ‘beautiful and special, working hard in a hidden way with often inadequate resources.’

The Dean continued: “It is a privilege for this Cathedral to act as a conduit for charitable giving once a year as the Black Santa tradition is so firmly implanted in the Belfast Christmas.”

He expressed concern that the Cathedral Quarter, which he described as ‘a success story in the city of co–operation across a range of facilities: artistic, cultural, retail, historical, hospitality, community orientated,’ had just learned of a drastic funding cut from the Department for Social Development.

Dean Mann concluded: “So, whilst we celebrate the work in which we all share in one way or another, we do so conscious that that the future will hold new challenges to what we are engaged in, that we may be operating with fewer resources and that the role of the charitable sector may need to be enhanced rather than decline in the coming months of financial stringency.”

Photographs of ALL the cheque presentations can be viewed by following this link. Photographs are free to download and reproduce.