St Paul’s parishioner voted Lisburn’s ‘Person to be Proud of!’ 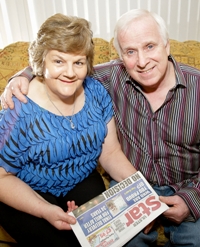 Report and photograph courtesy of the Ulster Star

A parishioner of St Paul’s, Lisburn, has been voted as Lisburn’s Person to be Proud Of 2011.

In the first ever competition of its kind in Lisburn, Mrs Oriel Gamble was crowned the winner following a week of voting by readers of the Ulster Star newspaper.

“I am speechless,” she said when she was told the news. “I cannot believe this. I was really humbled when I was nominated but to win is just overwhelming.”

Oriel, who is originally from Magheragall, has been a member of St Paul’s Parish since 1974 and has always been a valuable member of the congregation. She worked in Barbour Threads, Stewarts Mill in Antrim Street and in Hilden, where she retired after 40 years of service.

Oriel puts her heart and soul into her work and is always willing to lend a hand whenever she is needed. She works closely with the senior citizens in the church, organising an annual dinner in January, as well as day trips and shopping excursions. She takes pastoral care of a number of older members of St Paul’s and has proved to be indispensable.

Oriel also organises catering at the church, particularly for funerals. However, her services are not just limited to the church congregation, she also provides catering in the church halls, when needed, for Ronnie Thompson’s Funeral Home, which is located close by.

Oriel is also a valued member of the choir and Mother’s Union and is heavily involved in overseas mission, having visited Kenya with St Paul’s in the past. She is also preparing to return to Kenya later this year.

She is a real ‘people’ person and is always selfless with her time and energy – a vital part of St Paul’s and the church is her life.

Oriel was nominated by fellow parishioner Mrs Florence Malcolm. “We are one big family at St Paul’s and Oriel is a valued member of that family,” said Mrs Malcolm. “This is so richly deserved and I am delighted she is the winner. She is such a tremendous worker and she cares for everybody. She’s so hugely thought of in the church and without a doubt she deserves this recognition.”

The rector of St Paul’s, the Rev Canon James Carson, was also thrilled that Oriel was voted as Lisburn’s ‘Person to be Proud Of.’ “This is fully deserved for her work and commitment to the church,” said Canon Carson. “She is really involved with everything.

“It is not just work for the church,” he continued. “Many things she does are community based and with people at a real point of need. “That has been very much appreciated.”

Oriel said: “I want to thank everyone who voted for me and I would like to thank Mrs Malcolm, who nominated me, from the very bottom of my heart. I feel very humbled.”