A trip to Titanic Quarter for diocesan staff 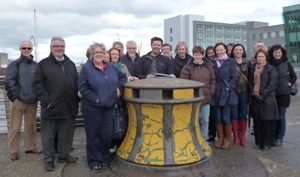 Diocesan staff had the opportunity to swap their desks in Church of Ireland House, Belfast, for the fresh air of Belfast’s historic docks on March 1.

An ‘away day’ organised by Diocesan Secretary Mrs June Butler brought staff from reception, administration, accounts and the offices of the Bishops of Connor and Down and Dromore together for a little teambuilding.

In what proved to be both an enjoyable and entertaining day out, the Rev Chris Bennett, chaplain to the Titanic Quarter, guided the group round the old and the new, delving back into the area’s colourful past when 15,000 workers toiled in the shipbuilding industry and looking to a future which it is hoped will be another jewel for Northern Ireland tourism. 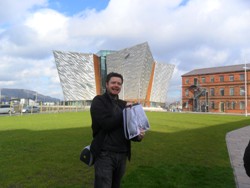 The day was blessed with good weather, and the spectacular new Titanic visitors’ centre, which will open at the end of March, the new Metropolitan College, the shining apartments and the White Star building all stood out against a blue sky.

But with the wind blowing across flattened areas still awaiting redevelopment, a sense of the lives that once were lived in this iconic part of Belfast was never far away.

The first stop was for coffee in The Dock Cafe, occupied by the Dock Church on a ‘meanwhile’ lease, where Chris talked about how he had watched the new developments rise from the ground since he was first appointed chaplain to the Titanic Quarter. He talked about the lives of those who worked in the ship building industry and about their great achievements, not least of those being the Titanic herself which, as he reminded everyone, had been ‘alright’ when she left Belfast.’ 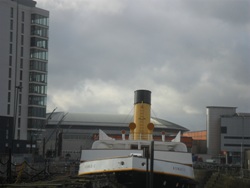 Chris also spoke about the Dock Cafe, which was transformed in the space of just a week for the benefit of TV presenter Eammon Holmes, who visited to record a segment for Songs of Praise being broadcast on BBC1 on March 11.

The group then walked towards the sites where the Titanic actually stood as she was being built. They passed the Nomadic, once a support vessel for Titanic, now restored to her former glory, and Chris showed old photographs taken 100 years or more ago showing the huge numbers who once worked there. Lunch was taken in the Pump House, where there was time for some team building challenges and a quiz.

Afterwards the group stood by the massive Thompson Dock where, with help of old photographs and guided by the fact that White Star House stands at the same height as the front bow of the Titanic, they were able to visualise this stunning ship as she stood almost ready to depart for Southampton and that immortal maiden voyage.

Before viewing a film in the old pump house, the group took part in a short act of worship, based on the Dock Walk that Chris and his team lead every Sunday afternoon, come rain or shine.

Chris was an excellent tour guide, his knowledge and enthusiasm bringing history truly to life.