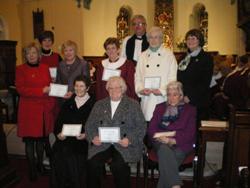 The Mothers’ Union Branch of the Parishes of Ramoan and Culfeightrin in Ballycastle celebrates its 120th Anniversary this year.

The branch was formed in 1892 and is thought to be the oldest branch in the Diocese of Connor.

To mark the occasion a service of celebration was held in Holy Trinity Church, Ballycastle, on Sunday February 26. Mrs Moira Thom, Diocesan President, was the Guest Speaker.

The rector, the Rev David Ferguson, conducted the service which was well attended with branches of the Mothers’ Union in North Connor being represented along with the local Presbyterian Women’s Group and friends from neighbouring churches. Past rectors also attended the service. 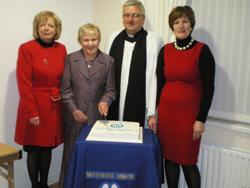 During the service long service certificates ranging from 25 years up to 60 years were presented to seven members. One indoor member, Mrs. Lesley Casement has served the Mother’s Union for sixty years.

Following the Service of Praise and Thanksgiving, supper was served by the members in Holy Trinity Cottage with a special 120th Anniversary Cake cut by Mrs. Thom and Mrs Girvan, Branch chairperson.