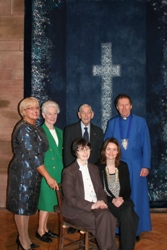 The 1,517 lives lost in the Titanic tragedy will be commemorated in a beautiful hand–crafted funeral pall which will be dedicated in St Anne’s Cathedral, Belfast, a century after the disaster.

The pall, made of 100 per cent Merino felt, is backed with Irish linen and dyed an indigo blue, evoking an image of the midnight sea in which the Titanic finally came to rest.

This stunning memorial to those who died when the historic ship hit an iceberg in April 1912 has been made by Helen O’Hare and Wilma Kirkpatrick, textile artists at the University of Ulster. The 12ft X 8ft pall was the gift of the Friends of St Anne’s Cathedral, and it was unveiled at a launch in the Cathedral on March 20.

A large central cross is fashioned from lots of tiny crosses and hundreds more of these crosses, in different sizes and shapes, each individually stitched in silk, rayon, metallic and cotton threads, fall away towards the velvet rimmed edges of the pall, symbolic of lost lives sinking into the dark ocean. 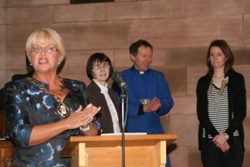 The vision behind the new pall came from the Dean of Belfast, the Very Rev John Mann. “The Cathedral doesn’t have a pall and really needs one,” he said.

“The theme of the lost lives was inspired by Philip Hammond’s new Requiem for the Lost Souls of the Titanic which will be performed for the first time in the Cathedral on April 14.”

Dean Mann enlisted the creative and inspirational talents of Helen and Wilma, members of staff in the Textile Art Section at the University.

The commission took three and a half months from the first meeting with the Dean until the pall’s completion at the end of February. 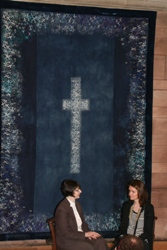 Helen said: “Wilma and I truly enjoyed working on this. You find great satisfaction in solving problems to make a piece work. Wilma and I came together to use our strengths and skills to create the pall. We have both worked on large scale textile artworks in the past so we were ready for this new challenge.”

Dean Mann said the ultimate design of the pall had been down to Helen and Wilma.
“A funeral pall has a cross in the middle and the background is normally violet, but we wanted to pick up some themes from the Titanic, namely the midnight sea. I felt there should be some silver and white there to represent the iceberg, but the girls came up with the idea of using multiple crosses,” he said.

“By using crosses of different sizes they have created the impression that they are falling into the water and set among these are more than 1,500 gold crosses and a number of Stars of David each representing a lost life.

“This is a very special piece of stunning needlework that people will travel to see – from the central cross that sits like lace on water, to its rich velvet border, rippling Irish linen lining and the felt pierced with crosses on a restless indigo sea. 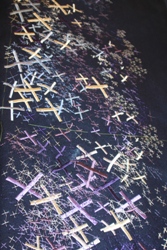 “Looking at the pall either from across the Cathedral or seeing the detail close up, it really catches the eye. It is worth a visit to St Anne’s to view this alone.”

Professor Ian Montgomery, Dean of the faculty of Art Design and the Built Environment at Ulster, said the School of Art and Design was delighted to have been involved with the commemorative pall.

“The imaginative way that our staff have been able to integrate a range of sewing and specialist textile art techniques – with the core concept around the sea and the reference to the Titanic – reflects the strong links between art, craft, design and the city,” he said.

“Dating back to 1849, staff and students from the Belfast School of Art and Design have produced many of the important pieces of art and designed artefacts seen across the city today.

“It is fitting that the School continues to make a substantial contribution to both the creative industries and the vibrant visual culture of Belfast and Northern Ireland as a whole.”

Special guests at the launch included the Deputy Lord Mayor of Belfast, Alderman Ruth Patterson and Dr Barbara Dass, Head of School in the Department of Art and Design at the University of Ulster, who both paid tribute to the beautiful piece of textile art and to those who had created and crafted it.

The pall will be dedicated at a Service of Commemoration in St Anne’s on Sunday April 15 at 3.30pm. For the next few months it will hang inside the Cathedral where it can be viewed by the many visitors expected to flock to Belfast to mark the 100th anniversary of the sinking of Titanic. After that it will remain in the Cathedral to be used at funerals when required. 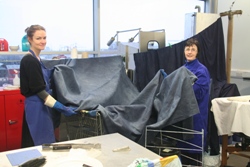 Steps to creating the Titanic Pall

• The Merino felt, linen and velvet were dipped into indigo dye to give a deep richness akin to the evening and night.

• After the dying process the Merino felt was stretched back into shape as felt shrinks when washed.

• Abstract, hand sketched and computerised crosses were embroidered onto the felt using a multi–head embroidery machine and further hand stitching was added. 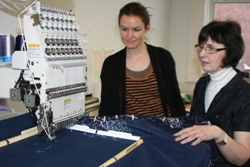 • Abstract gold crosses, Stars of David and crescents were hand embroidered onto the felt using gold silk thread which makes reference to the 1,517 people who lost their lives on the Titanic.

• The piece was washed to allow the threads to give a sense of depth on the felt and then further hand stitching was added to give a relief effect.

• The linen was quilted onto the back of the felt using a long armed quilter. Finally, the velvet border was added.

• Approximately 50 colours have been used
in this piece including silk, rayon, metallic and
cotton threads.