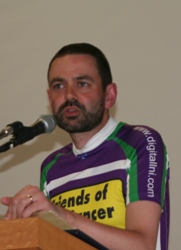 Congratulations to the Rev Andrew Ker, curate at St Brigid’s Parish, Mallusk, who is one of 8,000 people in the UK selected to carry the Olympic flame.

Andrew, 46, will carry the torch on part of the route through the Co Antrim coastal village of Carnlough on June 3 2012.

His torchbearing run will take him along a section of the route of the Tour de Connor cycle, which Andrew organised and took part in during June 2010. The Tour de Connor team cycled 351 miles over six days, linking all parishes in Connor and raising more than £40,000 for the Friends of the Cancer Centre.

Andrew was nominated as a torchbearer by the rector of St Brigid’s, the Rev Bill Boyce, who also cycled the Tour de Connor. The cycle marathon was organised to pay tribute to Bill’s wife Sandra who sadly died of cancer a year to the day before the Tour de Connor run ended, and to raise funds for the Friends of the Cancer Centre who had given the family such wonderful support during Sandra’s illness. 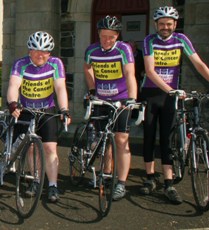 Father–of–three Andrew said he was looking forward to his 300 metre run on June 3. “I am delighted. The magnificent Olympic flame is one of those images you see over the years from you are a child and I am thrilled to be part of it. It is very special.”

Andrew said he was honoured and humbled by the fact that Bill had nominated him, and said his rector and many of the parishioners from St Brigid’s had already pledged to come to Carnlough to support him.

Andrew’s run with the Olympic torch will get underway at 2.50pm and take him through the centre of the village.

If you know of anyone else in the Church of Ireland Diocese of Connor who has been selected to carry this historic flame in the build–up to London 2012 please email dco@connor.anglican.org.