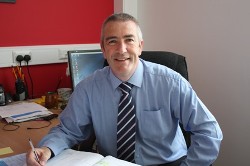 Mr Trevor Douglas has been appointed Diocesan Parish Development Officer for the Diocese of Connor.

Trevor, 51, is from Lurgan, Co Armagh, and is currently manager of the Jethro Centre in Lurgan.

His new role will be to support parishes throughout Connor Diocese by advising on parish projects and development, facilitating training for leadership and team ministry and supporting strategic development across the diocese.

A past pupil of Banbridge Academy, Trevor ran his own business before taking up the post at the Jethro Centre in 2004. A lifelong member of Shankill Parish, Lurgan, he was instrumental in establishing the Shankill Parish Caring Association in 1991. The Association’s vision is to promote the wellbeing of the inhabitants of Lurgan and the surrounding area and to promote the Christan faith among them.

The Jethro Centre is managed by the Association. Trevor oversaw the building of the centre which opened in 2006 and offers modern facilities including a sports hall and conference rooms.

He has recently worked with Connor Diocese having been seconded through CREED to work with churches in inner city Belfast.

Trevor said he was looking forward to meeting the people in Connor. “I see this as an exciting role for the diocese. It is the way churches need to go, to start to engage with community and to grow the Kingdom and be an influence on the community,” he said.

The Bishop of Connor, the Rt Rev Alan Abernethy, welcomed Trevor’s appointment. “I am thrilled that Trevor is coming to work in the Diocese of Connor. His expertise, experience and people skills will be of immense value to us all as we look to the future and the development of Connor Diocese,” the Bishop said.