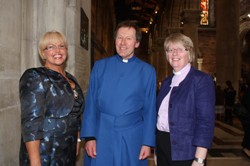 The lives lost in the sinking of Titanic and the skills of those who built her were remembered at a special service in St Anne’s Cathedral on April 15.

In his address, the Dean of Belfast, the Very Rev John Mann, acknowledged the huge fascination with the tragedy.

“The tales of heroism and self–sacrifice of self–preservation and social advantage have been frequently rehearsed in these recent weeks, but for us today it is in the separation of fact from fiction, from movie to reality is what is required if we are to remember in sincerity and commemorate in the true spirit of acknowledgement of both the nobility of humanity and its inner frailties,” the Dean said.

Turning to the present, the Dean highlighted the great energy for development in the Titanic Quarter and the work of the Church to ‘bring a sense of Christian witness that is not bound by the creased and worn divides of our history.’

Dean Mann concluded his sermon by urging the people of Belfast not to rest on past laurels, but to “continue to build a society that honours its past sacrifices, recognises its failures, celebrates its successes and works towards producing a healed and renewed people whose experience of difficult times will stand it in good stead in meeting very different challenges which, nonetheless ask the best of us all.”

The Dean was assisted with the prayers and readings by the Titanic Quarter Chaplains and Directors of The Dock Church from both traditions.

The service included elements of the original memorial service held in the Cathedral in 1912, the Sunday after the liner was sunk. The ‘Titanic Pall’ was also dedicated.

It was a sunny afternoon and special guests and some of the congregation joined a pilgrimage from the cathedral to the Titanic Quarter. Led by Titanic Chaplain, the Rev Chris Bennett, they stopped for reflections along the way and finished with a brief service at the Drawing Office where the plans for the Titanic first took shape.

The previous evening, St Anne’s Cathedral was packed for the world premier of Ulster composer Philip Hammond’s new ‘Requiem for the Lost Souls of the Titanic.’