Top prize for Aligo at Liverpool 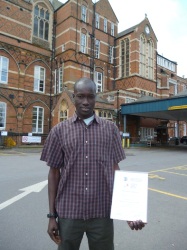 Confucius Aligo, or Aligo as he is affectionately known, is now back at the Martha Clinic in Connor’s partner diocese of Yei, where he will be able to apply all he has learned and pass that knowledge on to others.

Church Mission Society Ireland considers training to be an integral part of its ongoing support for the Martha Clinic, and Aligo is a great example of the success of the staff continuing education process.

Aligo is the senior Clinical Officer at Martha and has worked there since qualifying in 2008. The top clinical officer student of his year in 2006, Aligo is a very able Clinical Officer with a great interest in maternity and paediatric care. South Sudan probably has the highest maternal and neonatal mortality in the world so it is vital to have able clinicians keen to address these issues.

In January 2011, Aligo was offered a place to study for a Diploma in Reproductive Health in Developing Countries at Liverpool School of Tropical Medicine (LSTM). Joint funding was put in place from Agherton Parish Church and the Diocese of Salisbury. Unfortunately, the UK border Agency refused to allocate Aligo a visa in December 2010. 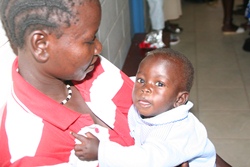 LSTM offered Aligo another opportunity to study from January–March 2012, and with a lot of effort a UK visa was given to Aligo in December 2011 and the funding again agreed with Agherton and Salisbury.

Aligo began his training in Liverpool at the beginning of January 2012. He adjusted well to life in Liverpool but never quite got used to the cold weather! To Aligo’s great credit, at the end of the course he was awarded the top prize. He wrote an excellent project on reducing neonatal mortality, and has several ideas of how to put his learning into practice on his return to Yei in April.

Aligo spent his last few days in Winchester at the home of former CMS Ireland mission personnel, John and Poppy Spens, who spent several years in Yei. Poppy has been integral in encouraging the ongoing training of staff and setting up the link between the Royal Hampshire County Hospital, Winchester, and Yei Civil Hospital and Martha Primary Health Care Centre.

Aligo spent two days in the hospital observing in paediatrics and maternity. In recent years several Winchester hospital staff have visited Yei but Aligo was the first from Yei to visit Winchester.

The Diocese of Yei and Aligo are grateful for the support and encouragement they’ve received from John and Poppy Spens and their friends in Northern Ireland. It has enabled not only Aligo to study in Liverpool but the capacity of many others will be built up through professional medical training.

David Gough, CMS Ireland’s Partnership Coordinator, said: “We are confident that their learning will benefit many people in Yei and further afield in South Sudan.”

If you or your parish is interested in supporting health training in South Sudan, please contact David Gough at CMSI.

David has written an update on the current situation in South Sudan, particularly with regard to its relationship with Sudan from whom it became independent in July last year. This update, including links to further reading, can be downloaded here.

Archbishop Daniel Deng Bul Yak, leader of the Episcopal Church of Sudan, has appealed for restraint from the presidents of Sudan and South Sudan. In a statement he urges them to pursue peace in spite of the difficulties following the major clashes threatening the fragile peace. More details can be viewed here.