St John’s parishioners follow the route of the Exodus 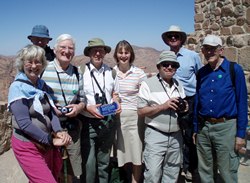 A group of 18 parishioners from St John’s, Malone, have recently returned from an 11 day pilgrimage to Egypt and Jordan, led by the Dean of Belfast, the Very Rev John Mann.

The pilgrimage had been booked before Dean Mann , previously rector of St John’s, was appointed to St Anne’s Cathedral.

The pilgrimage, which followed in the footsteps of Moses and the Exodus, combined a journey through the Royal Hashemite Kingdom of Jordan with a visit to the Sinai Peninsua of Egypt and the pyramids of Cairo.

In both countries the pilgrims met and enjoyed fellowship with the traditional dwellers of these ancient lands, the Bedouin, who live nomadically in tents with herds of camels, sheep and goats.

The group, whose ages ranged from 50 to almost 90, flew from London to Cairo on Wednesday April 18, where they were based for two nights in the Pyramids Park Hotel. On their first day they visited the pyramids and the Spinx. The following day they went to the National Museum and toured Coptic Cairo, including the Church of Abu Serge where tradition says the Holy Family took refuge in a cave under the altar when they fled from Herod. They stood by the Nile, recalling the story of the baby in the bulrushes.

Dean Mann said: “Cairo is expanding massively. There is now a new Cairo outside the old city and the population is growing by one million per year. We were struck by the numbers of young people we encountered, and also by the poverty.”

Leaving Cairo the pilgrims started on their Exodus journey. “I read about the parting of the Red Sea as we were in a tunnel under the Suez Canal,” said Dean Mann.

Their journey to Mount Sinai took the best part of a day, as the group travelled miles through the Wilderness of the Sinai Peninsula. And for 12 of the pilgrims, it was an early start the next morning as they headed out at 6am to climb the mountain. Three began their trek on camels, and after three hours climbing seven reached the top, along with two Bedouin guides.

“Most other groups had climbed even earlier to watch the sun rise, so we found we were alone at the top,” said Dean Mann. “It was fabulous. It was still, it was warm and it was clear. We read about Moses getting the 10 Commandments, and on the way down we met no one.”

The group celebrated Holy Communion in the desert and travelled to Jordan the following day, passing briefly into Israel. Although they did not encounter any trouble, the group had an armed guard with them at all times. 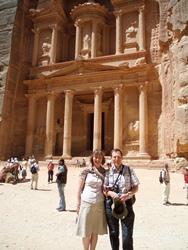 They spent a day in Petra, before travelling along the King’s Highway to Amman, stopping on top of Mount Nebo (accessible by road) to stand at the spot where Moses overlooked the Promised Land.

Based in Amman for three nights, they travelled to the north of Jordan, to Gadara, one of the cities of the Decapolis.

“On our last day we went to the site of the baptism of Jesus on the banks of the River Jordan, just across from Jericho,” said Dean Mann. “The King of Jordan has given land to the Anglican Church to build a Church of St John the Baptist on, and there is a plaque marking the place, although building hasn’t started yet.”

The pilgrims arrived home on Saturday April 26. They had enjoyed warm sunny weather and despite a few minor ailments everyone returned home healthy if a little tired from what had been a very busy itinerary.

Dean Mann said: “It was really interesting to follow in the steps of Moses and the children of Israel and to get some idea of what it must have been like for them to spend 40 years in that area. “