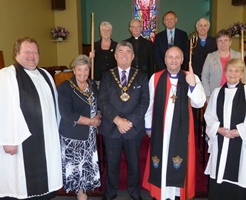 The Church of the Ascension, Cloughfern Parish, celebrated its 60th Anniversary at a special event held on Thursday May 17.

Members were joined by former clergy, parishioners and friends for a thanksgiving service in the church, followed by supper in the church hall. The special preacher was the Bishop of Connor, Bishop Alan Abernethy, who inspired all present with his message, as the church remembered its past, celebrated the present, and looked forward to the future.

As well as the Bishop, special guests on the night included the Mayor and Mayoress of Newtownabbey, Alderman Billy and Mrs Pat Webb; Michael Parr, son of the late Rev JEC Parr, founder Rector of the Parish; Canon John and Mrs Helen Mann (who served as a Curate, and later as a Rector, now Dean of St Anne’s, Belfast); Rev Stuart and Jane Lloyd, former Curate, now Rector in Ballymena; and Rev Sam and Angela Black (former Curate, and now retired ).

They were joined by other visiting family and friends of current Cloughfern parishioners. 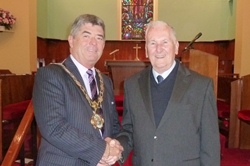 The evening proved a great success, and it was a great opportunity to meet up with old friends afterwards and catch up on news, while enjoying a lovely supper.

A film show of old and current photographs brought back many memories of days gone by, and a special anniversary cake was cut by Michael Parr, accompanied by two original church members Evelyn Lightbody and Beatrice Coote. 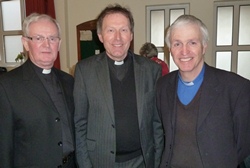