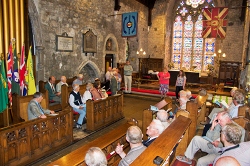 Their annual outing took members of the Church of Ireland Men’s Society on a visit to the Glens of Antrim on Saturday May 26.

It was a day of glorious sunshine which enhanced the beauty of the sea and the glens on the famous Coast Road.

The day began with a service of Holy Communion in St Nicholas’ Parish Church, Carrickfergus, conducted by the Rector, the Rev George Davison. This was followed by a talk on the church’s history by Mrs McVeigh and her family team.

The church, built 800 years ago by the Norman Knight, John de Courcy, is commemorated by the poet Louis MacNeice, a son of the rectory, in his poem Carrickfergus: 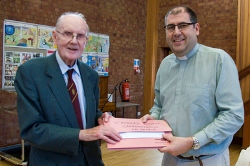 “The Norman walled this town against the country
To stop his ears to the yelling of his slave
And built a church in the form of a cross but denoting
The list of Christ on the Cross in the angle of the Nave.”

Coffee and lunch were served in the Parish hall.

The group then drove from Carrickfergus through Larne to Glenarm, passing crowds enjoying the weather on every beach and in every park and village. 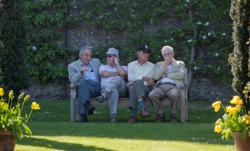 The next stop was a visit to the home of the Antrim McDonnells at Glenarm Castle. The McDonnells are one of the great families of Gaelic Ulster, the other two being the O’Neills of Tyrone and the O’Donnells of Donegal.

It was a privilege to be conducted around a stately castle which was also a family home and not a museum.

The day ended with a meal in the Londonderry arms, Carnlough, an inn once owned by Winston Churchill. Here members were joined by the Rev Helen McArthur, rector of the Glens of Antrim.