Olympic torch to light up All Saints’ Fete 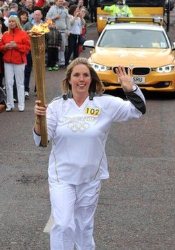 Paralympics gold medalist and Olympic torchbearer Dianne McMillan is to open the parish fete at All Saints’, Craigyhill.

With the whole country going Olympics crazy, the people of Craigyhill and Antiville are invited to join in the sporting fun at the event on Friday June 8 from 6.30–8.30pm.

The evening will be ‘lit up’ by Ballygally athlete Dianne as she opens the event with the Olympic torch she carried as part of the Olympic torch relay last weekend, and shows off her Paralympics medals. Primary aged children will then take part in a special Mini–Olympics challenge with Dianne awarding winners with a medal.

Dianne is an inspirational athlete who began her career at Larne Swimming Club. A below the knee amputee, she was the first ever Paralympian medallist from Northern Ireland – winning swimming gold in the 4×100 freestyle and 4 × 100 medley relays, plus silver and two bronze at the 1988 Seoul games, followed by another bronze in Barcelona in 1992. Her achievements were recognised over the weekend when she was given the honour of carrying the Olympic torch through Carnlough.

After meeting Dianne visitors can browse around for bargains at all the old favourites including the white elephant stall, tombola, cakes, plants and the ever popular B–B–Q. There will also be a colourful Children’s Mini–Fete boasting, kid’s tombola, bran tub, face painting, nail bar, and chocolate fountain.

The Rev Roger Thompson, rector of St Patrick’s, Cairncastle with All Saints’, Craigyhill, said: “The whole town of Larne has been buzzing with the torch relay this past week, so we’re delighted that Dianne has agreed to come along giving everyone a chance to get into the Olympics spirit.”

Admission is 50p for adults and 30p for children. 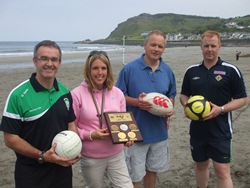 Along with Trevor Ringland, former Ulster, Ireland and British and Irish Lions winger, Dianne was a special guest at an Olympic Torch event which took place in Ballygally on Saturday June 2.

The family fun day began with a beach–clean followed by a barbecue. During the afternoon Trevor, together with Ronan O’Donnell [GAA coach from Genravel] and David McClelland [Glentoran Goalkeeping coach] organised a “Game of 3 Halves” on Ballygally beach – enabling young people to play Football, Gaelic Football and Rugby in turn. 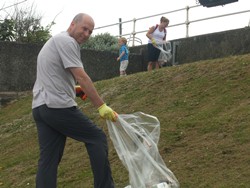