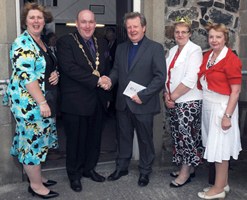 A Thanksgiving Service held in Magheragall Parish on Sunday June 3 to celebrate the Queen’s Diamond Jubilee was followed by a ‘traditional street party!’

The special guest was the new Mayor of Lisburn, Alderman William Leathem, who was accompanied by his wife Kathleen.

The service was led by the rector, the Rev Nicholas Dark, who has been appointed as the new Mayor’s Chaplain.  Everyone who attended received a commemorative gift to mark this historic occasion. 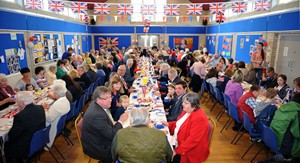 During the service Glynis Greenfield, the Sunday School Leader, co–ordinated the distribution of Sunday School prizes which were presented by the Mayor. The children sang ‘Thank you Lord for this fine day’. The service was followed by a ‘traditional street party’ in the adjoining church hall where a Diamond Jubilee cake was cut by senior parishioner Charlotte Dickson assisted by the new Mayor. 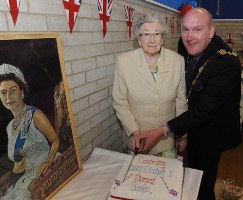