Good Book Shop event promises to be a ‘source of inspiration’ 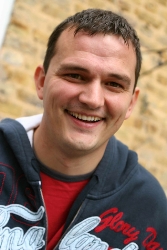 The Good Book Shop is organising a major event happening in East Belfast later this month.

‘No Ceiling to Hope– An night of Worship and Inspiration’ will take place in Willowfield Parish Church on June 23 at 8pm. The guest speaker will be Patrick Regan, founder of an urban youth charity in London called ‘the excel project’ or XLP.

The charity serves young people in schools and communities across seven inner–London boroughs.

Patrick has written a new book called ‘No Ceiling to Hope – Dangerous stories of grace in action’ which came about as a result of last summer’s riots in London. The book recounts his travels around the world which took him to troubled areas where he witnessed grace in action, and saw Christians reaching out to those in need.

One of the chapters deals with time he spent on the Shankill Road, and his involvement particularly with Woodvale Methodist Church and a group of elderly ladies from the parish who reached out to the community by cooking meals for unemployed men who would spend their days sitting in the local pubs.

Patrick recently won the Mayor of London’s peace award. He speaks regularly at Soul Survivor and Spring Harvest and he is an Ambassador for ‘Compassion.’

Patrick is returning to Belfast to promote his book, and to talk about the work he does with XLP.

Richard Ryan, manager of the Good Book Shop, said: “The ‘No Ceiling to Hope’ event will be a night of enormous importance for church, community, youth workers and to all Christians who want to do more for their fellow men, women and children. The event promises to be a source of inspiration for all those who attend.”

‘No Ceiling to Hope’ by Patrick Regan will be available to buy on the night, or can be purchased in advance from ‘The Good Book Shop,’ Donegal Street, Belfast at the special price of £5.99.