An ‘astmosphere of unity and common purpose’ – Dean Mann 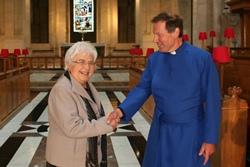 Dr Maria Voce, President of the International Focolare Movement, addressed a congregation of around 250 when she spoke in St Anne’s Cathedral, Belfast, on June 14.

Dr Voce, from Coscenza, Italy, was in Ireland to speak at the International Eucharistic Congress in Dublin.

Dr Voce spoke on the subject ‘Building Communion through a Culture of Trust.’ The full text of her address, which was delivered in Italian and translated to listeners, can be downloaded (in English) here.

The Focolare Movement was founded in Italy during World War Two. With its focus on the two–sided coin of Jesus’s prayer for unity and his cry for abandonment on the cross, the Movement’s spirituality soon spread beyond Italy and is now present in 198 countries throughout the world.

It has given rise to many social projects and relationships between people of different ethnic background, religion and conviction.

Dr Voce has been the Movement’s President since the death of its founder, Chiara Lubich, in 2008. She has made dialogue and building relationships of trust a key priority of her Presidency.

Representatives of the four main denominations in Northern Ireland were present at the service. They were: Methodist President, the Rev Ken Lindsay; the Church of Ireland Bishop of Connor, the Rt Rev Alan Abernethy; former Presbyterian Moderator, the Rev Dr John Dunlop; and the Roman Catholic Bishop of Down & Connor, the Most Rev. Noel Treanor.

During the service there was a brief liturgy by the Cathedral and the Focolare. The Dean of Belfast, the Very Rev John Mann said: “One of the most moving parts of the service was when the four church leaders read the Pact together.”

The words of the Pact are as follows: “United in the name of Jesus, we promise each other that for the whole of our life we will strive in all things and above all things to love one another as Jesus loved us.

“Grant us, Father, the grace of your Spirit, that we may become one with each other, that we consider the other’s cross our own, that the joy of the other becomes our joy, the yearning of the other our yearning, so that all may be one and the world may believe.”

After the church leaders read these words in unity, they joined Dean Mann and the congregation in repeating the Pact.

Dean Mann said the service, which began at 5pm on June 14, had been very successful. “There was a real atmosphere of unity and common purpose,” he said. “This coming together and having someone speak from outside our situation was really quite important for us.”

He added that Dr Voce spoke very well and the content of her address was very challenging.