Royal choir appointment is a dream come true for Victoria 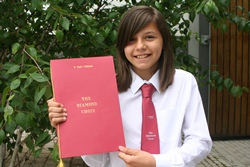 Singing in St Paul’s Cathedral for Her Majesty the Queen at her Diamond Jubilee Service was a dream come true for 11–year–old Victoria McClements.

Victoria, a pupil at Antrim Primary School, was one of only two young people selected from Northern Ireland to join the Diamond Choir which performed in London on June 5 as part of the jubilee celebrations.

Victoria’s mum Audrey, parish administrator at All Saints’, Antrim, said Her Majesty had watched the choir of 10 to 13–year–olds with great interest as they sang the anthem ‘The Call of Wisdom’ specially composed for the occasion by William Todd.

And Victoria was close enough to see that Prince William was visibly moved by the words of the song. “I think Prince William started to cry at the end because he had a tissue out,” she said.

Audrey, who was in St Paul’s for the service, agreed that it had been a very emotional piece. “It was very, very powerful. When the children were singing you could have heard a pin drop, it was a very moving experience,” she said. 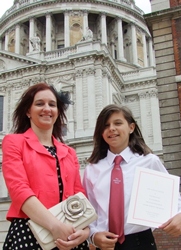 When Victoria saw places in the choir advertised, she had to submit 50 words online explaining why she would like to sing in St Paul’s. She wrote: “My passion is singing and the most important person in the world is the Queen, combine the two and my dream comes true – to sing to the Queen. It would be a privilege to sing in St Paul’s Cathedral with other people my own age in the special Diamond Choir.”

From this initial application, 400 children aged 10–13 were selected for audition. For Victoria that meant a trip to St Anne’s Cathedral, Belfast, to sing in front of local judges, David Stevens, Master of Choristers at St Anne’s, and Cathedral organist Ian Barber.

In common with all the other children being auditioned, Victoria had to sing ‘Be Thou My Vision’ and ‘The Londonderry Air.’ She was coached by Joy Moore, one her teachers at school.

“I knew the Londonderry Air because I play it on the violin, but it was in a different key, D Flat, which was quite difficult to learn,” Victoria said.

Ten days later she received a letter saying she had been successful. “I was really excited because I did not really think I was going to get to go,” Victoria added.

All members of the choir had to learn the new anthem, and Victoria was assisted by school choirmaster Stephanie Reid. She did not meet the rest of the 40–strong choir until the Sunday before the service, when the young people from all parts of the UK got together at St Paul’s Cathedral School. The following day was spent in rehearsals in St Paul’s itself, in preparation for the big day.

“It was really exciting. I was a bit nervous because from where we were sitting I could see all the Royal family and the Queen, and when we were singing she was really staring at us,” said Victoria.

It was a memorable occasion for Audrey too. “I was so proud,” she said. “I had never been in St Paul’s before and was amazed by the size of it. The first hymn itself was amazing but when the choir began to sing they totally stole the show!”

Victoria has an Order of Service, a copy of the ‘The Call of Wisdom’ anthem score and a Diamond Jubilee Choir tie among her souvenirs of the day.

A very musical young lady, she plays violin, piano and ‘a bit of guitar,’ but singing is her passion, and she is currently taking classes with former Eurovision Song Contest winner Niamh Kavanagh.

Victoria recently released a CD in support of Charlene’s Project which is aiming to raise funds to build a school in Uganda. On this she sings ‘Arms of an Angel’ and ‘I Was Here’ by Lady Antebellum. Copies of the CD are available at £3 each and can be obtained by contacting Audrey on amc1971@hotmail.co.uk.

Now back to school, Victoria is continue to pursue her musical passion and is performing in a local production of Calamity Jane as well as attending the Ballymena branch of the Belfast School of Performing Arts.

And having sung for the Queen, Victoria’s next ambition is to sing in front of a King (of sorts!) because if she gets her way she might be trying to impress Simon Cowell and his fellow judges on ‘Britain’s Got Talent!’