History in the air as Stranmillis bell marks Jubilee! 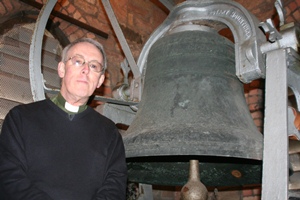 Sixty years ago on the Accession of Her Majesty the Queen, the ancient bell in St Bartholomew’s Church, Stranmillis, rang out in celebration.

History will repeat itself when during the Queen’s Diamond Jubilee visit to Northern Ireland, St Bartholomew’s will again sound its glorious bell to mark another historic milestone.

The bell, which dates back to the 14th century, will be rung at 11.30am on Wednesday June 27, immediately after the morning service of Holy Communion.

The bell in the tower of St Bartholomew’s was the fifth of the ancient ring of eight in St Patrick’s Cathedral, Dublin, and dates from the 1300s. After these were replaced by the present larger ring of 14, the Dean of Saint Patrick’s (1935–1950), the Very Reverend David F.Wilson was chiefly instrumental in having two of the bells transferred north, with one installed in Saint Bartholomew’s in 1938.

The many historic occasions on which it has rung include the marriage of Queen Mary with Philip of Spain, the Accession of Queen Elizabeth I in 1558 and that of every successive British Sovereign down to Queen Victoria. It sounded forth in thanksgiving for the great victory over the Spanish Armada in 1588, and at the Victories of Derry (1689), the Boyne (1690) and Aughrim (1691).

It tolled in honour of the deceased hero at the Battle of Trafalgar in 1805 and to celebrate Wellington’s victory at Waterloo in 1815.

It first rang in Stranmillis on November 11 1938, and in 1945 this bell proclaimed in Belfast the final victory of the Allied Forces in the Second World War immediately news was received.

So listen out for the ring of the St Bartholomew bell at 11.30am on June 27. It will be the sound of history.