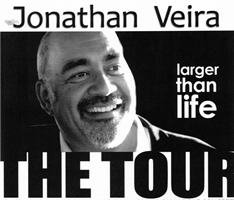 Recently praised in The Independent for his brilliant performance – ‘larger than life and utterly credible’, and by The Arts Desk for being ‘a comic (bass) baritone now in his vintage prime’, international opera star Jonathan Veira is no stranger to venues that hold thousands of people.

The intimate concert in St Patrick’s on Saturday, September 15 is part of Jonathan’s ‘Larger than Life’ tour. This year, instead of performing Verdi, Britten or Donizetti on the opera scene as he did – to critical acclaim – in 2011 and before, he is now just as likely to be found singing Billy Joel or Gospel. Jonathan is a musical chameleon, performing songs of great diversity to an incredibly high standard – which possibly makes him unique in the world of entertainment.

Jonathan Veira’s one man show is distinctive because you get so much more than just ‘the voice’. He is a superb comic raconteur, whose anecdotal story telling has people of all generations rocking with laughter.

When asked why he is putting aside opera for a while and going ‘Larger than Life’, Jonathan said: “For nearly 27 years I have been singing opera all around the world whilst also developing my ‘Audience with JV’, which actually began 22 years ago. The ‘side–show’ has gradually taken on a life of its own … spawning a DVD, seven gospel CDs and a list of venues wanting to host the show. We’re excited that 2012 is the year to give airspace to JV simply being JV with an audience.

“I’m energised by doing these shows because of the closeness and interaction with the audience. It’s wonderful to be able to incorporate the wide variety of music that I love to perform from Verdi and Mozart to Billy Joel, Elton John and even some Country & Western for goodness sake! I love having the freedom to tell the stories of my life and faith in an open, honest – and mostly funny – way! I believe that all this together makes my show unique.”

Jonathan, who was in Ethiopia at the start of the year, is in partnership with Compassion UK – a child–sponsoring charity that works with children all around the world.

For more information on Jonathan visit the website www.jonathanveira.com.

The concert in Ballymoney begins at 7.30pm, there is parking in the parish centre car park, and tickets are available from the church office on 028 27662323.