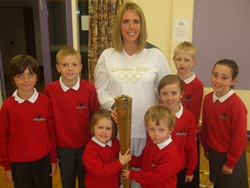 Children at Cairncastle Primary School were thrilled to meet Paralympian swimming double gold medallist Dianne McMillan when she visited their school assembly along with local Church of Ireland minister the Rev Roger Thompson.

Dressed in her Olympics Torch Relay tracksuit, Dianne talked about her sporting career which began at Larne Swimming Club when she was aged five and progressed to her becoming a Paralympic double gold medallist. Aged 16 she won two gold, one silver and two bronze medals at the 1988 Seoul Games, followed by a bronze medal at the 1992 Barcelona Games.

Dianne explained to the children about her disability – she is a below the knee amputee – showing them the prosthetic leg she uses for running, and how she had to work really hard at her training to achieve success as a swimmer.

She also showed them the Olympic torch she carried through Carnlough during the torch relay back in June. Dianne encouraged all children to participate in sport because it helps you keep fit and healthy, it helps you make good friends and it teaches you self–discipline.

Dianne finished by answering the children’s questions, and everyone had a chance to hold the torch.

Roger, rector of St Patrick’s, Cairncastle with All Saints’, Craigyhill, said: “It was really good of Dianne to make time to come along for the assembly. The children really enjoyed meeting her and hearing all about the Paralympics – they even gave her a spontaneous round of applause at the end!”