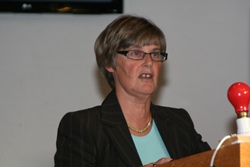 Four Notices of Motion in relation to Diocesan Council were agreed on a show of hands at Connor Diocesan Synod on October 4.

Two of the notices of motion related to amendments which did not make any change to the processes involved with voting for membership of the Diocesan Council or with filling vacancies with supplementalists, but were purely to ensure that there was clarity of interpretation.

The third motion followed recent discussion about conflict of interest. Rather than leave this to the discretion of the bodies concerned, the Secretariat felt it would be appropriate to amend certain regulations.

The fourth motion related to the reform of the Diocesan General Fund Assessment.

The first motion was proposed by Lay Secretary Robert Kay, the second by the Dean of Connor, the Very Rev John Bond, the third by the Rev Paul Redfern, and the fourth by Lay Secretary Ken Gibson.

Speaking to the fourth motion, Diocesan Accountant David Cromie advised all parishes to go home and ‘give your honorary treasurer a hug.’ He added: “These guys do a massive amount of work.”

David outlined proposed changes to assessments, and he and his department were congratulated on their work by Victor Cole, treasurer at Cloughfern parish. Victor said many people did not seem to realise parishes needed money as well as prayer. “I am delighted with this new accounting procedure and I think it will be a way forward,” he said.

The changes were also backed by Alan Hibbert, treasurer in Kilroot, who said this was a ‘much better way’ of doing assessments.

Proposing the motion, Ken Gibson said he was pleased with the discussion that had taken place. “It is a topic that we are rarely comfortable debating,” he said.

Outlining the benefits of the new assessment procedure, Ken said that parishes who are paying too much would find the situation sorted out more quickly; parishes who are not paying enough would be brought back into line rather than being unaware and building up debt; and the process woule keep parishes and the accounts department in touch and so pre–empt problems.

The Diocesan Council report also revealed that an offer of grant assistance in the region of £900,000 from the International Fund for Ireland to the Open Hands project proposed for the now closed St Luke’s Parish Church between the Falls and the Shankill in Belfast had to be withdrawn.

The report states that the project had not met all conditions that had been set by the deadline of June this year.

Agnes Young, a synod member for 40 years, and a member of St Stephen and St Luke, told Synod that this was ‘the hardest speech’ she ever had to make.

Addressing some of the issues that had resulted in the withdrawal of the grant offer, Agnes said the committee had not had the experience to put everything in place to meet the funding body’s deadline. “It was a wonderful project bringing people from the Falls and the Shankill together but it has not taken off,” Agnes said. She revealed that an appeal to the IFI had also been unsuccessful, but said the parish of St Stephen and St Luke still had a vision for the Open Hands project.

Bishop Alan said he promised the project his continued support.

The Rev William Orr used the consideration of the Diocesan Council report to warn parishes of the pitfalls of using sand and cement on an old building, recommending the use of hydraulic lime instead.

The Council report was proposed by Cynthia Cherry and passed unanimously.