Diocese explores ‘the things that matter’ as Connor does Synod differently 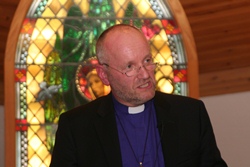 The Christian faith was talked about in a ‘positive and real way’ as Connor Diocese did Synod differently at St Brigid’s Church, Glengormley, on October 4.

Paying tribute to the Bishop of Connor, the Rt Rev Alan Abernethy, for his leadership, Canon Sam Wright, Lisburn Cathedral, said: “This Synod has been a venture of faith and was a risk worth taking.”

In a break from the norm, the formal business of the Synod was conducted prior to the evening meal. Standing orders were suspended for the second Synod session which moved Connor’s Vision Strategy to the next phase by looking at how the vision can work in real situations.

Speakers included Dr Paul Coulter from Belfast Bible College, who spoke about ‘Maintenance or Mission’ and Tim Magowan from Tearfund, who addressed how parishes could make ‘A Local Connection.’

A key part of the evening was interviews with a panel made up of the Rev William Orr, the Rev Roger Cooke, Peter Blake and parish development officer Trevor Douglas, with the questions posed by the Rev Barry Forde, Chaplain at Queen’s University. 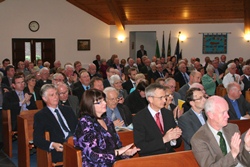 William revealed how his own interest in flute bands had been a way of engaging members of local ‘blood and thunder’ flute bands with Muckamore, Killead and Gartree churches with outstanding results, and how getting involved in a controversy over a July bonfire has reaped benefits for the entire community.

The 12 flautists and four drummers have learned to play a variety of hymns – in a blood and thunder style – and at a recent Ulster Covenant service in the parish the members of the ‘Flute Band Church’ provided all the music.

Roger spoke about the Daybreak service, worship for every age and stage, which he introduced soon after moving to St Patrick’s Coleraine. It has been so popular with families that at the previous Sunday’s Daybreak service at 9.30am in the parish hall, more than 300 were present. It is a far cry from when Roger arrived in the parish.

“One Sunday I looked around and there were only two families in church. One of them was my wife and she was signalling for the keys as she wanted to leave too.” With such a dramatic turnaround in just two years it is small wonder Roger was emotional when he talked about breaking the 300 barrier. 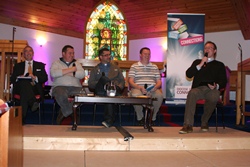 Peter, from St Paul’s, Lisburn, told how after making an arrangement with a local restaurant he had gone out and asked people face–to–face to come for a free meal and the chance to follow the Christianity Explored course. The first night there were 30 people there, a few attendees were unchurched but the majority were attenders rather than having a personal faith.

“For six weeks we got together to eat curries and sausages and chips and study St Mark’s Gospel,” Peter said.

The interview was an opportunity for Trevor Douglas to introduce himself to Synod. After hearing his fellow panellists, Trevor said: “My heart has been warmed by this and I am feeling very positive.”

Bishop Alan’s presidential address in the earlier part of Synod was largely focused on the three strands of the Connor Vision Strategy – engaging communities, empowering ministry and effecting change.

Closing or grouping parishes in the face of decline is not the way forward for churches in the city of Belfast, but the Church instead has to find more creative and imaginative ways of being church in the city, the Bishop said.

He paid tribute to ‘those who have kept the faith and enabled parishes to continue in some very difficult circumstances.’

Reflecting on the Vision Strategy, the Bishop said: “We are at a critical point in the life of the church and it is very important that we continue to seek the wisdom of God as we wrestle with the many issues facing us.”

He added: “The speed of change in the last few decades has been rapid and the cultural backcloth to the mission and ministry to which we are called is very demanding.”

The Bishop said that with a shortage of finances and the decreasing numbers being ordained in the last few decades, this was a ‘God moment,’ and he hit out at any suggestion that clergy visiting was the answer to all problems, describing this as ‘fanciful and unhelpful’ and stating that it would not of itself stop decline.

Change would not be easy, he said. “At the same time there is the recognition that we have to do something to re–engage with many who no longer believe that the church has anything important to say or do,” the Bishop added.

“Change is always painful and stretching, but when handled carefully, honestly and with consultation it can and will bring new hope and energy. As someone said to me at one of the deanery meetings, ‘we have to do something, we cannot bury our heads in the sand.’

“The journey has begun and there is no blueprint for where we need to go but I hope that there is the desire to discover what it is we are being called to do and to follow. That will mean many conversations and much prayer as we journey together.”

He said his role was not to tell people what to do, but to listen, encourage and enable.

Bishop Abernethy said the Church of Ireland had faced a difficult year. “The Cavan conference was a positive experience but General Synod was not so comfortable. The central issue that has caused this deep division is not resolved and we have to find more creative ways as synodical church to deal with such controversial and divisive issues,” he said.

The Bishop paid tribute to Peter Hamill who had moved on after giving ‘wonderful service’ as training co–ordinator, and welcomed Trevor Douglas, newly appointed parish development officer to the diocesan team. “He comes to us with great experience and skill at being able to develop the ideas and dreams that we will need to have as we look to the future,” said the Bishop.

Around 300 members attended the Synod which was preceded by a Service of Holy Communion in St Brigid’s Church. The meal was provided by the ladies of St Brigid’s and their hospitality was appreciated by all.

Closing Synod 2012, Bishop Alan said: “One of the joys for me this evening was to sit and listen and to be encouraged.”He added: “This is a Synod that has been talking about the things that matter.”

Further reports will be posted shortly.

Visit our album of photos of synod 2012 by clicking this link.