In this article, Church of Ireland House staff members Sylvia Lockhart and Margaret Yarr look back on the Trek Cambodia Challenge they successfully undertook for Marie Curie in October. 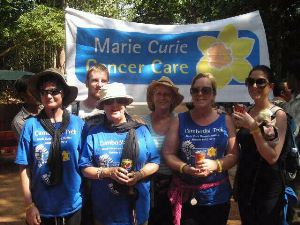 Sylvia Lockhart and Safeguarding Trust Officer Margaret Yarr were part of a six–strong team which undertook the challenge as a tribute to Sylvia’s late mother Esther.

Joining them on Team Esther were Margaret’s son Nathan and daughter Leah, Sylvia’s sister Eileen, and friend Irene Murphy. The six were part of a group of 34 trekkers from Northern Ireland to undertake the trek in October.

The team raised an amazing £19,505 through activities including a sponsored abseil, coffee mornings, street collections, car boot sales, clothes recycling and sponsorship. That was the hard bit, but if they thought the challenge was going to get any easier they were wrong!

Firstly, there was the journey itself, with the group travelling out to Cambodia via London, Paris, Hanoi and Laos, and returning via Ho Chi Minh, Frankfurt and London. There were also the primitive toilet and washing conditions to contend with, mosquitos, high humidity, heat, treacherous terrain, unpleasant foliage and the relentless rain. 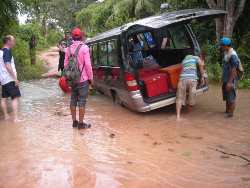 The group arrived in Cambodia on a Saturday afternoon, and began walking the following morning. “We started out on a dirt road, which was a bit like the M1 compared with what we were walking on later,” said Margaret. “Soon we headed into the jungle which was hot and humid and because of the heavy monsoon rain was very muddy.”

The conditions underfoot made the going tough, with Sylvia literally falling over three times on that first day, not to mention getting stuck in the mud on occasions!

“It was not the distance we walked that was killing,” said Margaret, “it was the terrain and the heat.”

They covered 22km that day, and slept in tents set up inside a school because the ground outside was so wet. Margaret and Sylvia were filled with trepidation at the thought of the day ahead. “They told us we would be going through waist deep water and there was a lot of anxiety about that,” said Margaret. “We came to several waterways that looked impassable and we had to take our boots off and wade across. With more than 30 of us this was very time consuming!

“We finally came to the river they had been talking about and realised there was no point in taking anything off. The water wasn’t waist deep, it was chest deep.”

There was nothing for it but to keep going, wet clothes or not. Both Margaret and Sylvia took it in their stride. “We were actually glad of the coolness of the water,” said Sylvia. “But our boots never dried during the time we were trekking. When we got to the campsites at night it was dark and nearly always raining.” 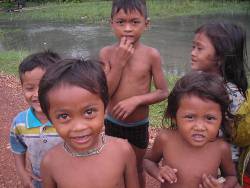 Much of their walking was through paddy fields. “We had to walk on a narrow piece of ground between the rice fields. It was like walking on a beam, the rice plants were huge and the water on either side of the path was very deep,” said Margaret.

They spent their second night in tents pitched inside another school. At 7am the children turned up for their lessons. “We did not leave until eight and the little children stood outside and waited as good as anything,” said Sylvia.

The trekkers had brought items like pencils and sharpeners which they left for the schoolchildren. Although the accommodation was basic, the food was good, and breakfast was always substantial.

The third day of the hike took the group up the holy Kulen Mountain. “It was extremely tough,” said Margaret. “The mountain was very steep and rocky and it was almost lunchtime before we reached the plateau at the top. Even that was on an incline.”

The day was meant to end at a sacred waterfall on top of the plateau, but as they trekked through the jungle towards the waterfall, darkness set in and local people had to bring the last trekkers out of the jungle on the back of motorbikes.

Getting to camp that night was a hairy experience, as Sylvia recalls. “We were dropped off and told the camp was only 150 metres away but it was totally dark and the ground was rocky. Someone eventually came out with a torch. We had to cross a rickety wooden bridge with lots of slats missing to get to our tents.”

Each tent was set up on a raised platform with a bamboo roof to shelter it from the inevitable rain. That night Sylvia was too weary to cross back over the bridge for dinner. “I was that tired I had to crawl up on the platform on my knees, we had walked so far and for so long,” she recalled.

Next day the group did get the chance to see the sacred waterfall before heading down the mountain to camp in another school with a final half day hike to the finish.

With the trek behind them, the group had the opportunity to visit Angkor Wat, the largest temple complex in the world.

During the walk, team member Irene suffered a torn cornea when a branch caught her eye the first day, but after being tended by the trip doctor she bravely walked on. Sylvia and several other trekkers reacted to the sap from the foliage which infected their legs, and everyone suffered swollen ankles, but there were no serious injuries.

Margaret, who won the post–walk award for ‘Most Glamorous Trekker,’ believes she got off light. “I enjoyed it but I would not do it again. I feel that I was lucky. I had done no training and I feel this was a wonderful achievement. It is also excellent that the trek raised so much for Marie Curie,” she said.

Sylvia, on the other hand, is itching to go again. “It was a brilliant, brilliant experience and I would do it again tomorrow. There was a great team spirit and the craic was fantastic.

“A lot of people aske 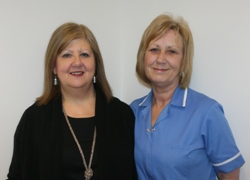 d why I had to go on a trek, why I didn’t just hand over the money to Marie Curie, but I would never have been able to donate as much if I had not been fundraising to do the challenge. People were very generous in their sponsorship.

“Everybody on that trek had their own story. I sat looking out at the rain one night and said to Eileen ‘If our mum was looking down on us she would be saying ‘look at those two idiots, why are you doing something like that!’ I think mum would have been proud us of for doing it.”